"They came not to steal, but to destroy" - how the “Pohliad” ("The View") media outlet was shot in Bucha - Національна рада України з питань телебачення і радіомовлення

The TV channel “Pohliad” from Bucha is a media outlet that had been growing and developing along with the town. It grew up from a small media to a company with its powerful 3D-studio, modern newsroom, equipment, licensed software and, most importantly, the team that worked with love and joy. It took two weeks for the russian invaders to destroy all the efforts, achievements, everything that was invested in the work of the team. But they will not be able to destroy the dreams and plans of the journalists. Their mission – to convey the truth to people, to work with the community and for it – will definitely carried out ahead. With our support and your support. Get involved.

Patreon to support the TV channel “Pohliad” is available here.

“They came not to steal, but to destroy”, says Oleksii Zinevich, the owner of the TV channel “Pohliad” and of the ISP “Best” from Bucha, telling the story of his companies. His channel was popular in the Kyiv neighbourhood, and the Internet was provided to Bucha, Irpin and Hostomel. The russians destroyed his business. That is why now Oleksiy does not choose words in a telephone conversation: “They are savages. Even if they destroyed the director’s office, crushed the equipment, what is the reason for destroying toilets and the kitchen with sledgehammers!? » 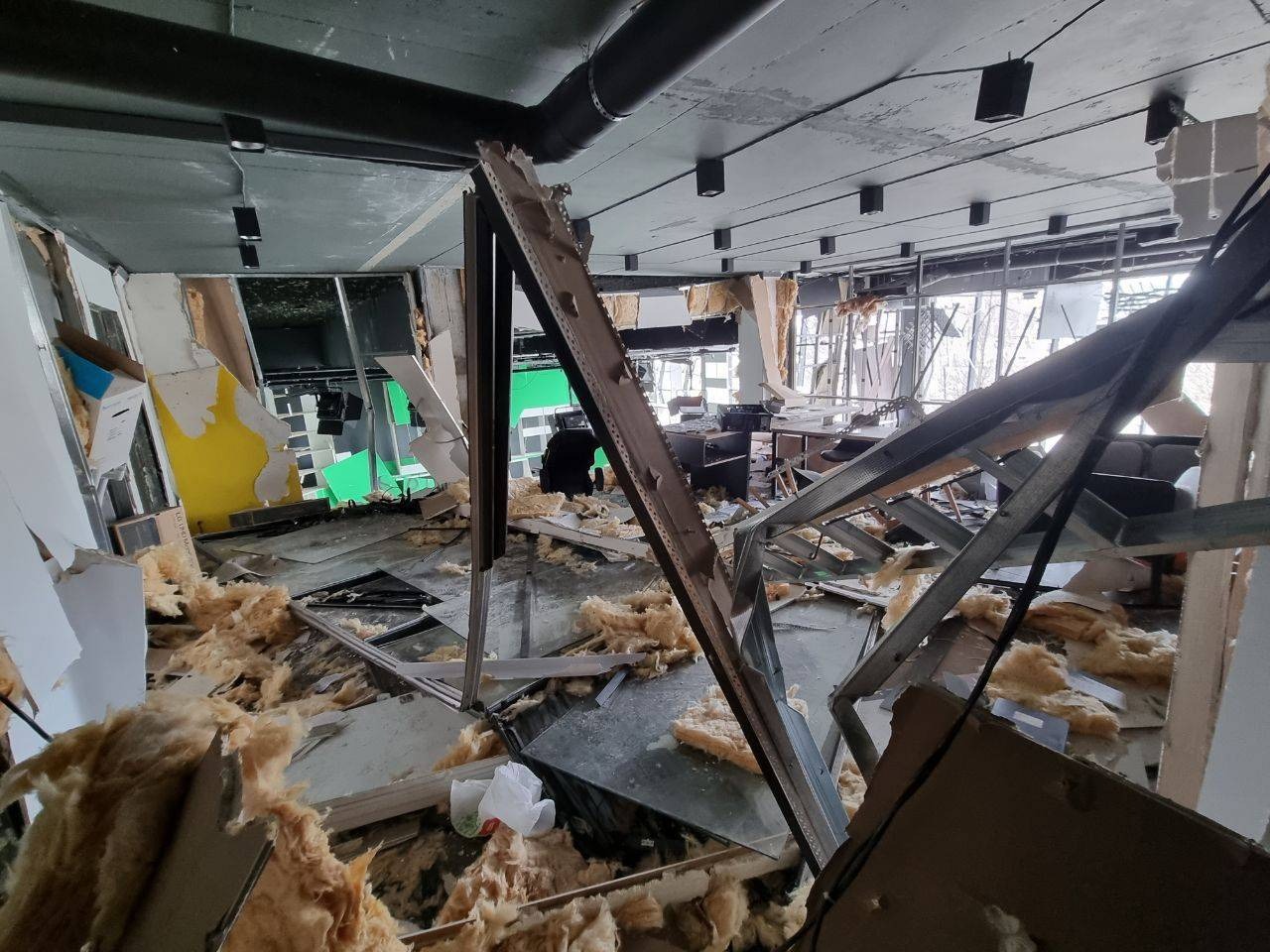 The mass destruction of the TV company “Pohliad”

The russian invaders shelled the residential complex “Continent”, where the premises of the Buchan “Pohliad” were located, during the first days of March. A column of tanks, which was then destroyed by the Ukrainian troops at Vokzalna Street, passed by the residential complex and managed to shoot at the house. After that, the staff still sewed the broken windows of the TV company office with plywood, but in a few days there was already a ruin. 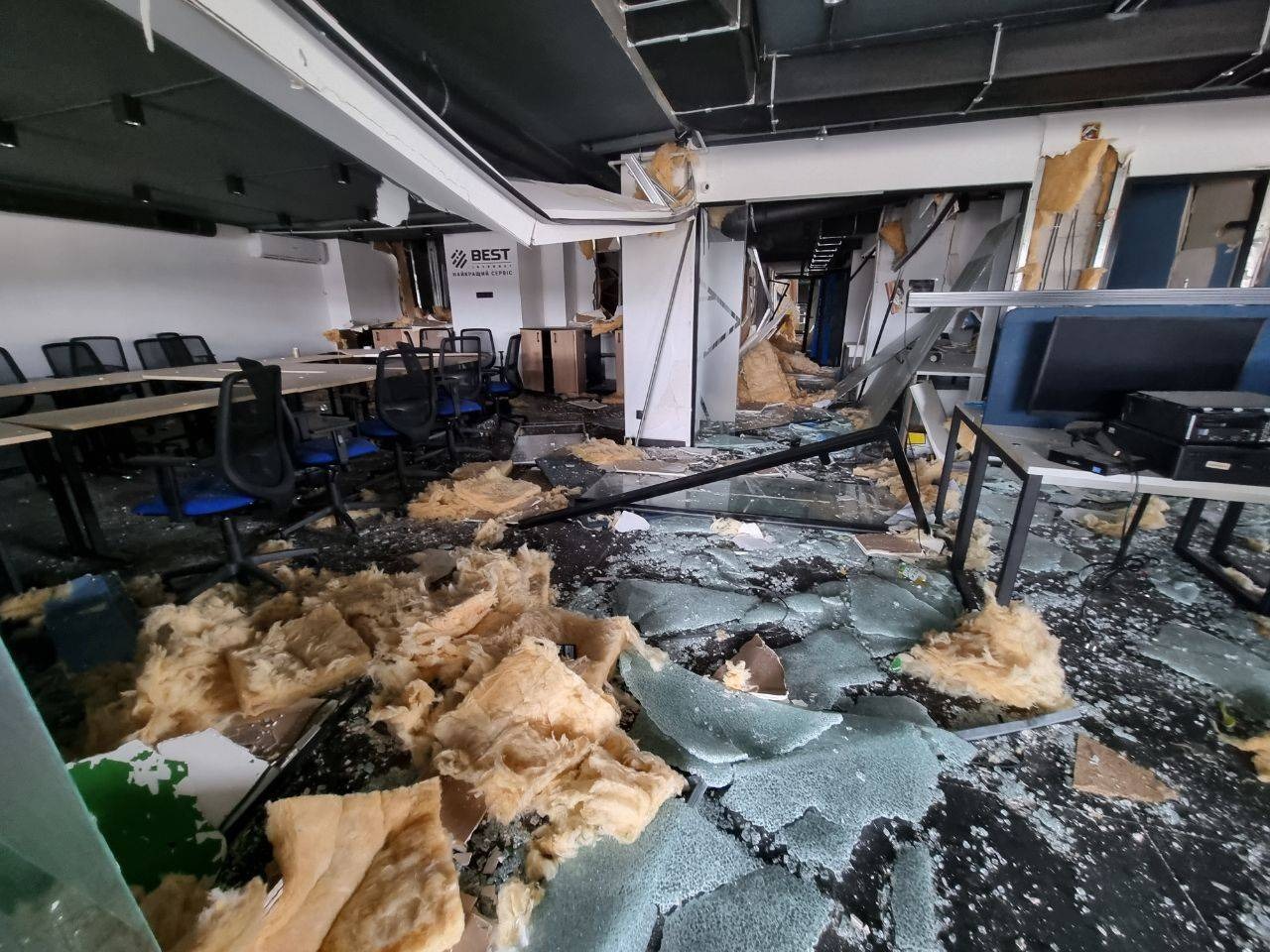 The robbed office of the Buchan “Pohliad”

On March 15, the russians entered the premises of the TV company. The last guard who was inside was able to escape and go out unnoticed on March 20. The man reached our people and succeeded to left the city on foot under the bullets.

The invaders began to mercilessly rob and destroy, as Oleksii Zinevych shares his memories. They drove cars close and took out expensive equipment: cameras, director’s equipment, laptops, computers. They smashed the equipment, trying to find precious metals and video cards. They completely destroyed the 3D-studio, which the channel “Pohliad” had installed not so long before and which it was very proud of. They smashed the furniture, the kitchen, the offices with sledgehammers – everything had been destroyed. 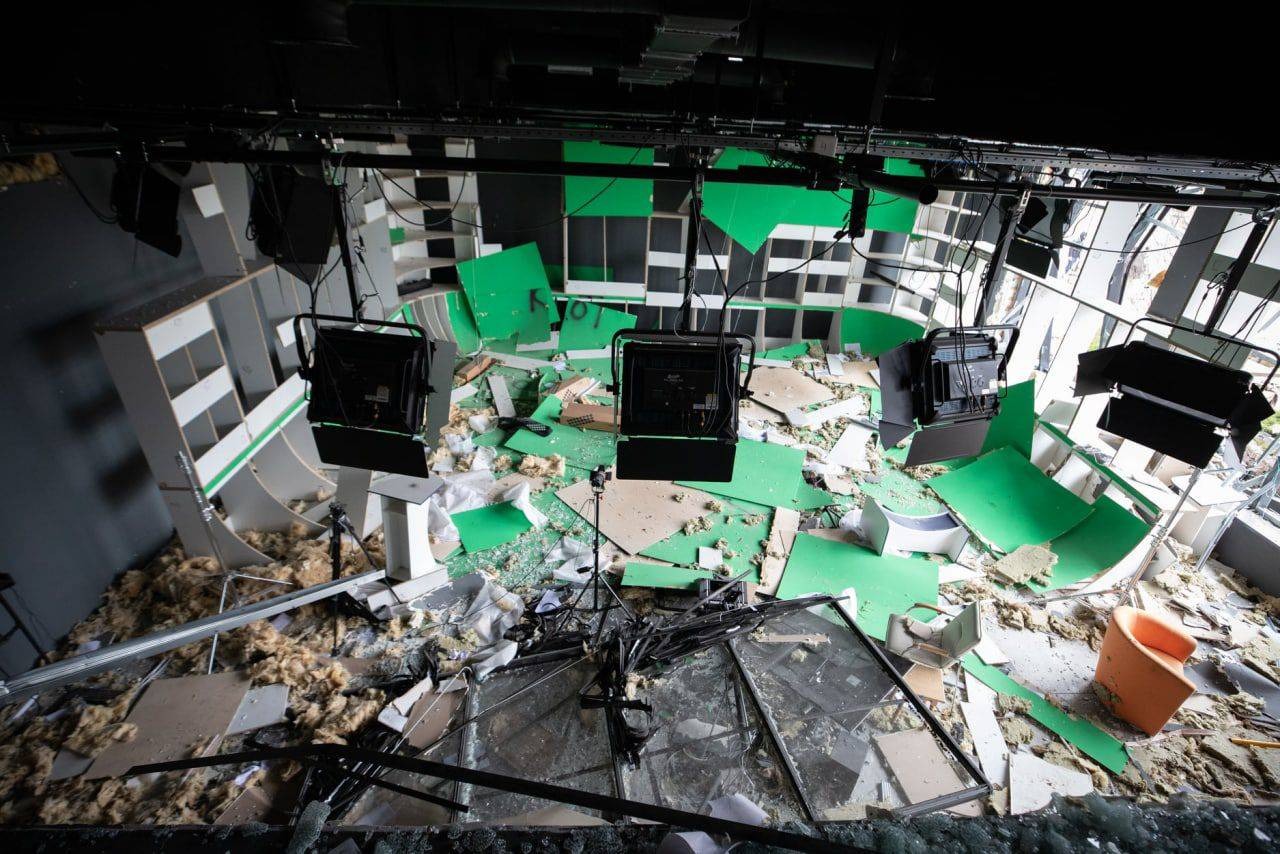 The shot studio of the TV channel “Pohliad”

The barbarism in the premises of the “Pohliad” lasted for two weeks. The russian fascists robbed the entire residential complex “Continent”. The loot was taken out of the town by cars, the owners of the apartments were thrown out of the windows, shot in the yard.

The russians installed their cables and equipment in the TV company. Near the “Pohliad” there was a communications vehicle of the occupiers, to conduct radio surveillance.

The journalists and employees of the “Pohliad” managed to escape timely. They left Bucha, Irpin, Hostomel in early March. The latter fleet on March 12. Now they work abroad and in the west of Ukraine. The Buchans refugees were sheltered by the Lviv Media Forum. It organized a shelter for media professionals from all over Ukraine.

During the occupation, the Internet service provider “Best” had been heroically fighting. The ISP employees and the owner Oleksii Zinevich personally saved the networks so that Buchans and Irpinians would be with the Internet for as long as possible. Even when there were battles, Zinevich and his people, overcoming fear and risking their own lives, established transmission lines. They promptly restored the networks affected by the explosion of the Romanivsky Bridge, and already under the russian occupation, their guerrilla tactics in the zone of great danger let restore the Internet, where it was possible. On March 25, they had to escape in order not to be captured by the russian invaders. Unfortunately, not everyone was able to get out of the occupation – the driver of the company died, there is still no connection with some employees of the ISP, their fate is unknown. 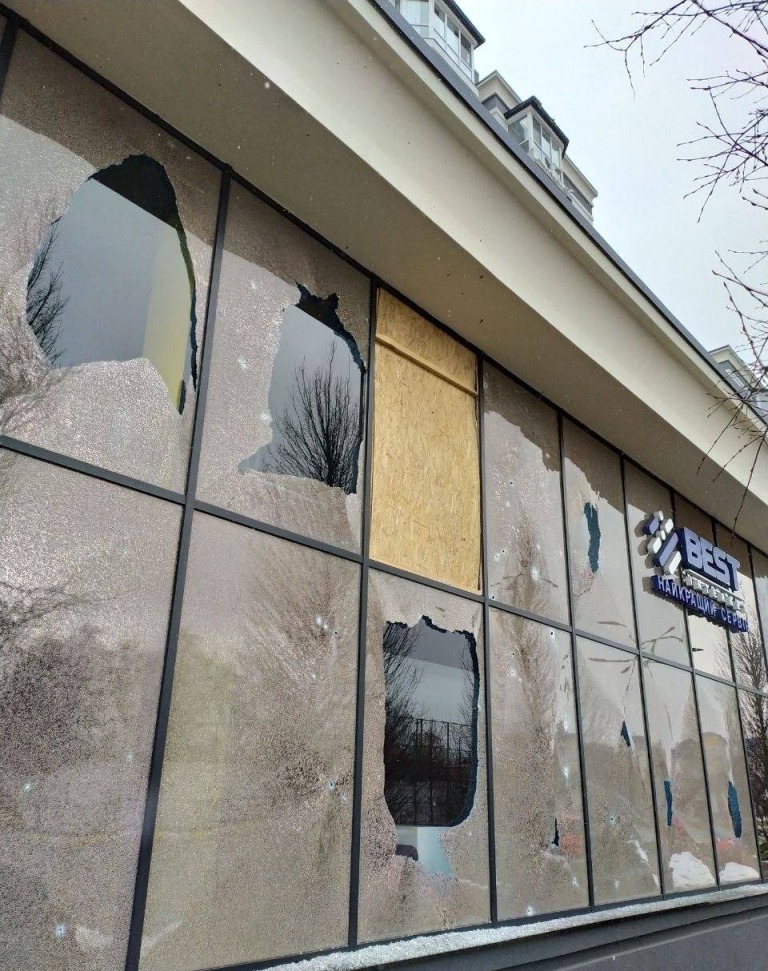 The windows of the TV company shot by the ruscists

The journalists of the “Pohliad” during the fights, during the occupation, and after they got evacuated, have never stopped to do their work. Having lost broadcasting, they develop their YouTube channel. They used to make 30 materials every day, their videos now have millions of views, and the number of subscribers has grown from 20,000 to 120,000. 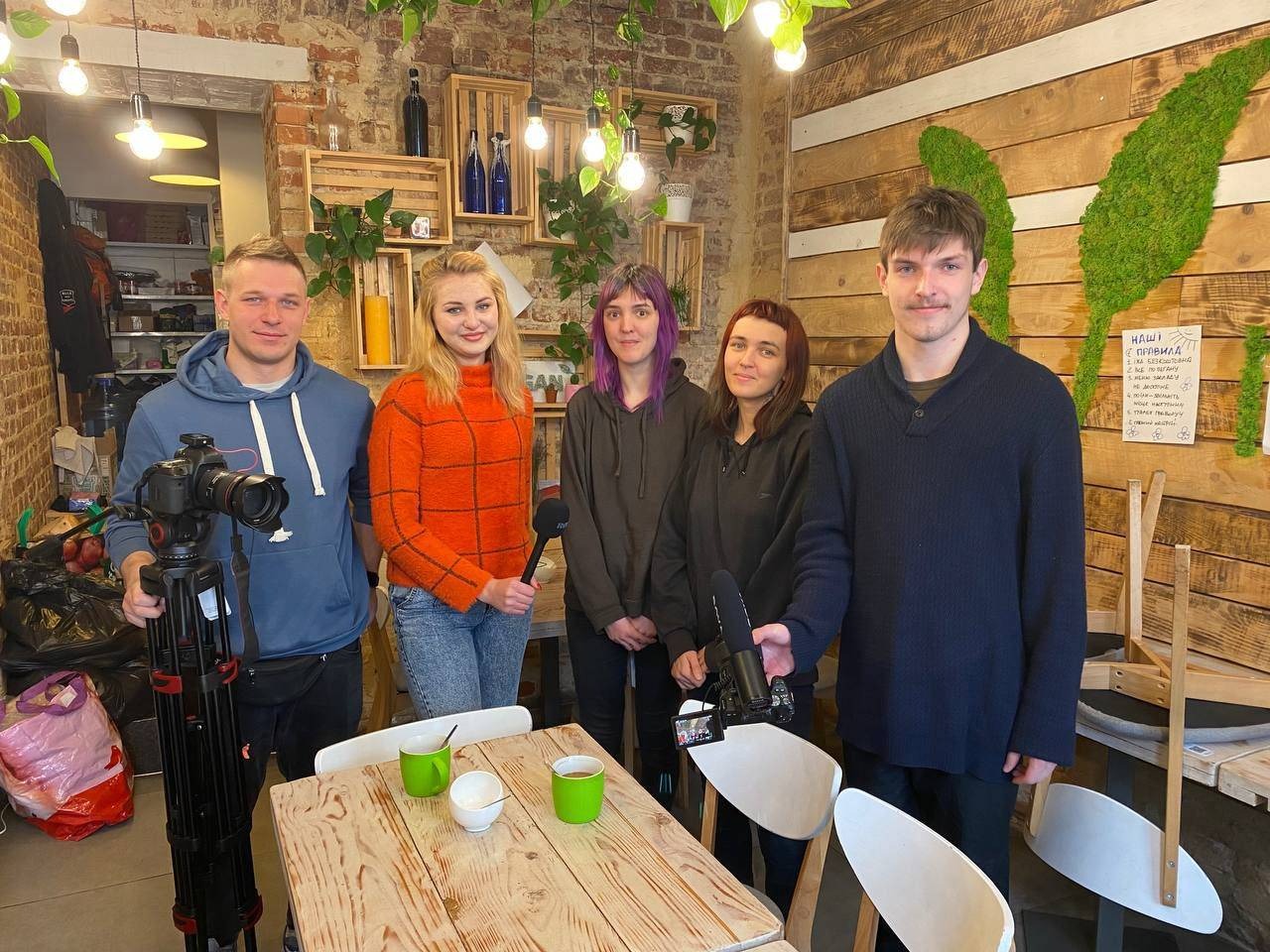 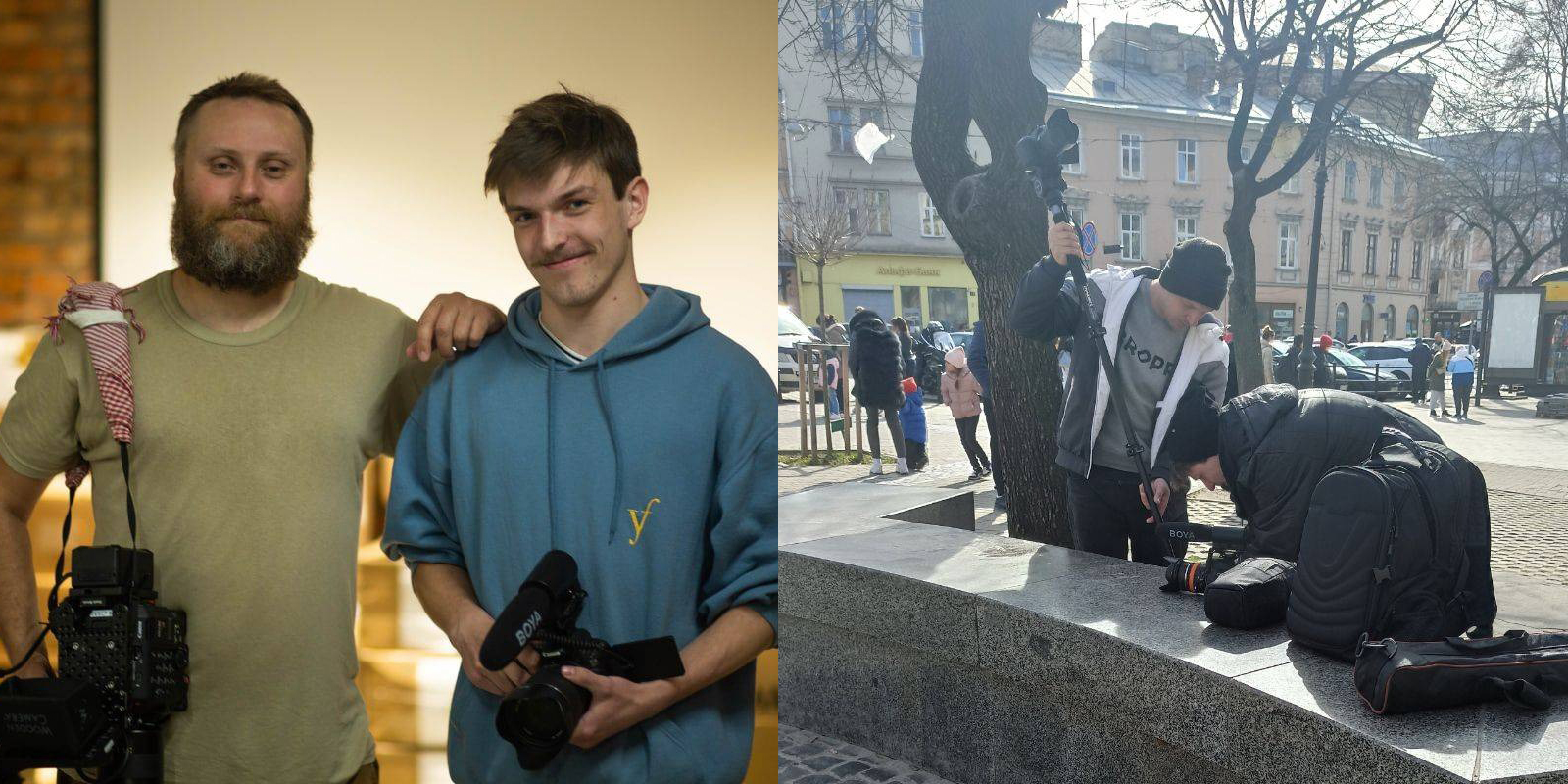 The journalists of the “Pohliad” continue to work from Lviv

Natalia Zinevych, a journalist, historian, now in Sweden, works from abroad. She says that she regrets the archive of the TV channel: “It died at all: the servers were destroyed by the russian barbarians, and the drives, the so-called “pockets” with gigabytes of information, were stolen.”

“There is nothing left now. Everything is destroyed. We will have to start from scratch”.  Oleksii Zinevich got back to his hometown immediately after the liberation and was horrified. The only hope for the underground communications, they were saved. This means that the inhabitants of Bucha, Irpen and Hostomel will be able to get the Internet. 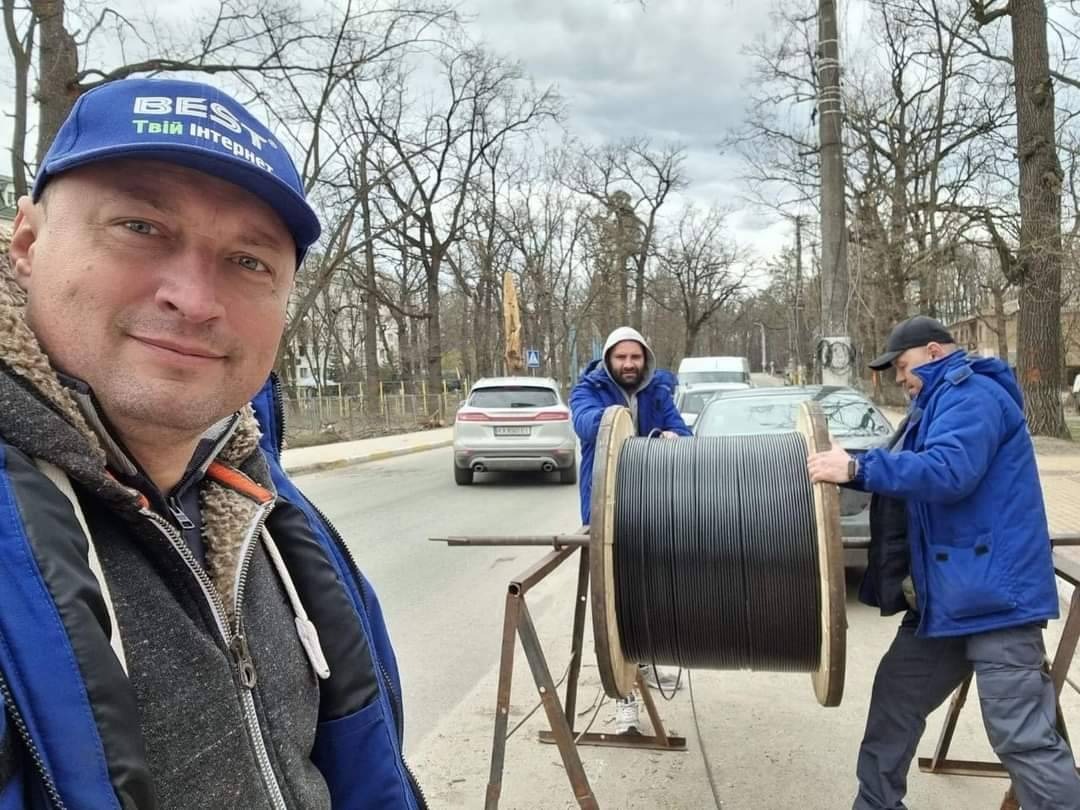 The employees of the ISP “Best” restore Internet communications in Bucha

Now the journalists of the “Pohliad” work on a volunteer basis. Everything he could, the owner had been paying until the last, then it remained only to close the channel. The team supported Oleksii and is now working for free to save the Buchan TV company. The Ukrainian “View”.

The National Council will appeal to the media community of Europe, grantees, patrons with a request to support journalists and Internet service providers affected by the russian atrocity in all cities of Ukraine – to shelter those who are forced to flee from russian fascists and support those who are already working to restore broadcasting and the provision of Internet services. Ukrainian broadcasting will never be killed!

Fascist russia is afraid of the truth, and russian propaganda must be destroyed.