Development of local broadcasting in Ukraine

For three years the National Council has been implementing the Community Broadcasting Project due to which 74 local radio stations obtained their chance to launch broadcasting. Thus, as of the end of 2018 in 24 regions of Ukraine 177 local broadcasters work in the FM range. 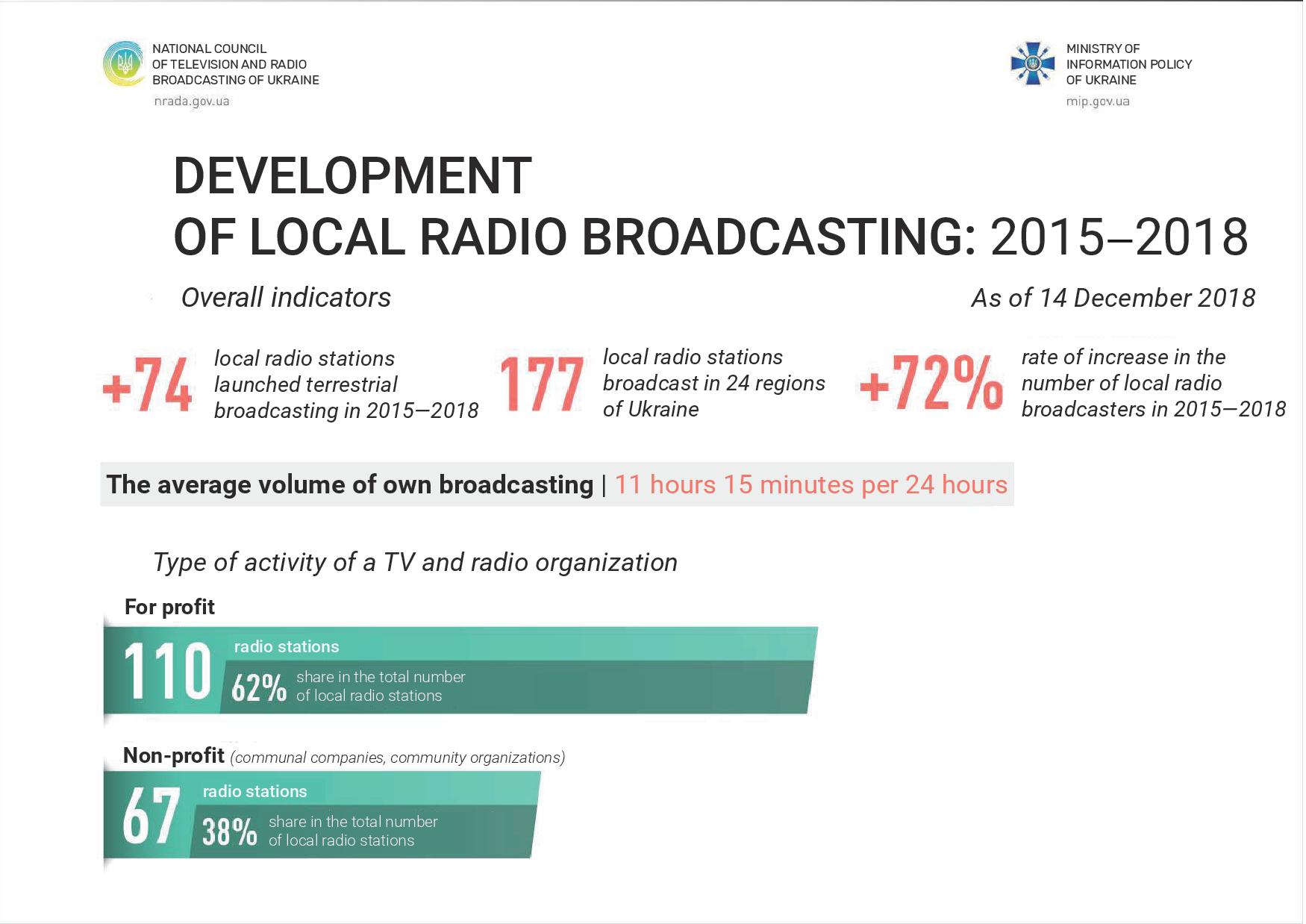 According to the analytical indicators of the performed work, the local community of Kharkiv Region appeared to be the most active. After all, during the period of the project this region out of all the regions received the highest number of frequency allotments – 20. Instead, Mykolaiv and Kirovohrad Regions joined the process last, and the National Council has just received their applications for frequency calculation.

It is also clearly evident that the Regulator’s policy regarding the frequency allocation has not changed. Thus, the held competitions resulted in granting of: 85 frequencies to the public broadcasting programmes; 77 frequencies – to local broadcasting; 53 frequencies – to regional radio stations; and, lastly, to private, network, national stations.

In general, during the period from 2015 to 2018, the National Council granted 97 frequencies, most of which – 57 frequencies – were given in the framework of format competitions. The programme concept of such competitions suggests that at least 15% of its broadcasting a radio station should devote to their region, as well as cover the local interest. In addition, only rebroadcasting of the Public Service Broadcasting programmes – “Ukrainian Radio”, “Radio Promin”, “Radio Culture” – is permitted. Considering the fact that that it is rather problematic for local companies to ensure a 24-hours-long broadcasting, the following results were achieved: in 42 localities 33 radio stations operate, which along with the programmes of local interest rebroadcast programmes of Public Service Broadcasting. Mostly “Radio Promin” is retransmitted – by 24 radio stations.

At the end of December of 2018 the Regulator, due to the availability of free radio bands, approved the decision to announce one more competition for local broadcasting in 37 FM-frequency bands and in one medium frequency band in 16 regions of Ukraine. The programme concept of this competition defined by the National Council provides for broadcasting of not only programmes of Public Service Broadcaster but also of the Military Radio “Army FM”

The National Council plans to develop further local radio broadcasting and recommends local companies to apply to the Regulator for frequency calculation.

More information is available in the analytical report.