European countries continue to shut down Russian propaganda channels and take other measures against them. The European Platform of Regulatory Authorities (EPRA) coordinates information related to the measures taken by European NRAs. 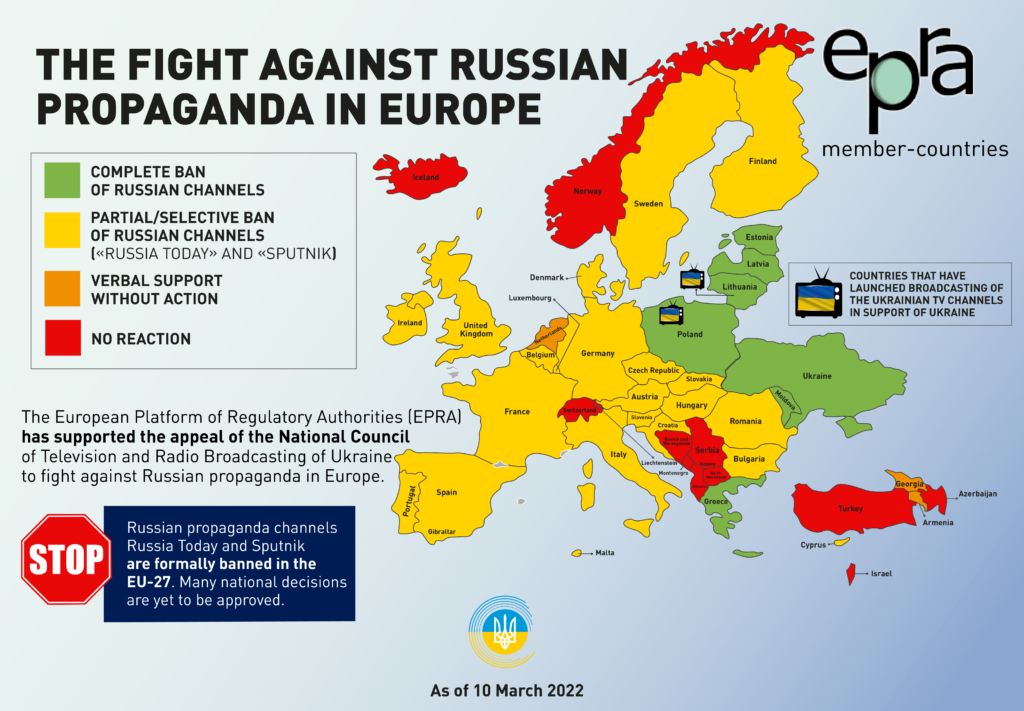 Netherlands
Russian TV channels Russia Today and Sputnik are not licensed and do not broadcast on cable or terrestrial networks in the Netherlands. The NRA is determined to stop the spread of disinformation and hate speech from Russia Today, Sputnik and other Russian-controlled media outlets.

Greece
The NRA banned the broadcasting of Russian channels and blocked access to Russian media websites.

UK
Ofcom has launched 27 investigations related to Russia Today and is initiating discussions to revoke its license.

Lithuania
The NRA temporarily suspended retransmission of programme services of Russian origin. The NRA addressed all Lithuanian telecommunications operators and recommended that they include the following Ukrainian channels in their packages.

Latvia
The NRA restricted broadcasting of 28 programme services related to Russia and Belarus. In early March web resources related to Sputnik and other Russian media were blocked. In the coming days, Ukraine 24 TV channel will be available free of charge as part of terrestrial broadcasting in Latvia.

Romania
Russia Today is no longer broadcast at the national level, and local service providers are monitored on an ongoing basis to ensure that no channel from Russia broadcast in Romania.

Georgia
The two largest IPTV operators – Magticom and Silknet – have added the Ukrainian TV channel Ukraine 24 to their packages free of charge.

EBU
The European Broadcasting Union suspended Russians from the organization.

EPRA
The European Platform of Regulators (EPRA) has supported the National Council’s request to combat Russian propaganda in Europe and has called on all European regulators to detect and stop Russian disinformation. As main coordinator of such monitoring – EPRA collects all recorded cases on its official website and reports on the actions of regulators on the detected Russian propaganda. The management of the Platform is convinced that European regulators are monitoring the media coverage of the situation in Ukraine and will determine the necessary measures of response. The EPRA Board informed all member countries that Roskomnadzor had recently forced the Russian media to publish only information from official Russian government resources.

Google, Apple Inc.
RT and Sputnik were blocked in app stores in Europe.

Olha Herasymiuk, Chair of the National Council, wrote about the decisions of European countries on her Facebook page.