"If you hear the sound of the plane, it means that there will definitely be an explosion, and you pray not to have it near" – the experience of the information resistance of the “Mariupol Television” - Національна рада України з питань телебачення і радіомовлення

Back in February, the TV and radio company “Mariupol Television” was preparing for the holiday. On March 5, 2022, it would be 25 years old. The company was developing dynamically, received a digital license, planned rebranding and studio renovation, it even was in the process of recording greetings from famous Ukrainians, and on the day of its foundation planned to hold a big telethon. Russia’s full-scale invasion on February 24 put an end to the plans. But “Mariupol Television” has survived.

On the day of the invasion, the staff of the television company immediately turned into emergency operation. The emphasis of broadcasts was placed on the recommendations of experts from the Ministry of Emergency Situations, the advice of doctors, the city defenders, the police. 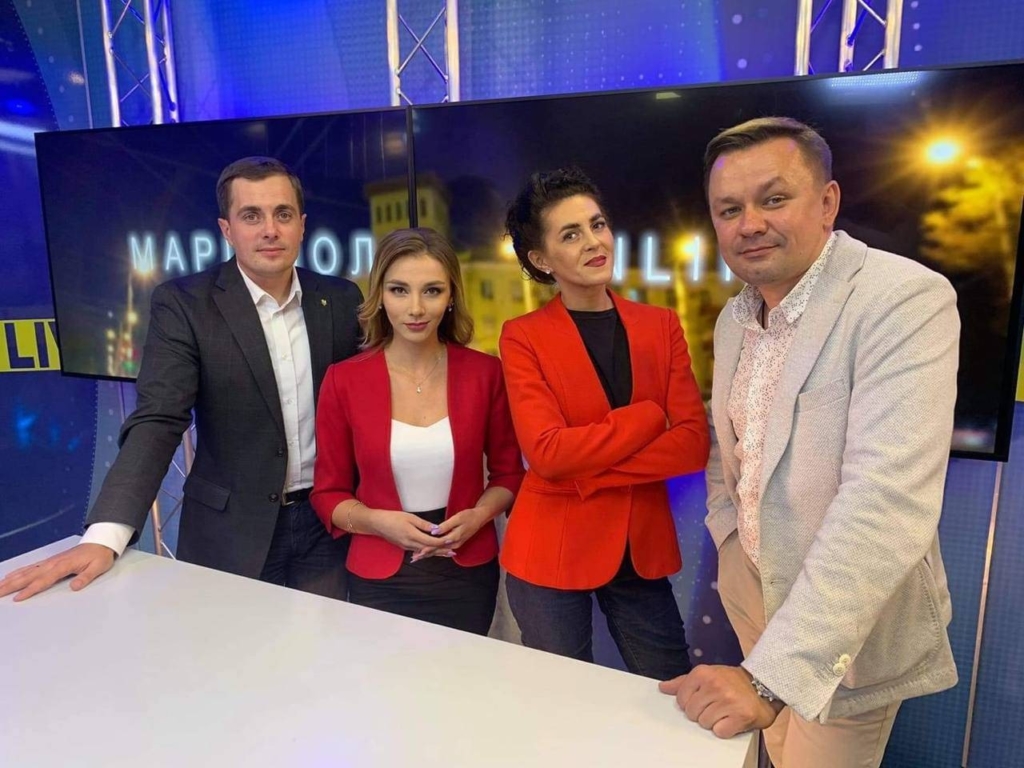 In just a few days the ruscicts shelled the transformer station and the whole of Mariupol was left without electricity. It was impossible to repair the station – it was destroyed to the ground.

Mykola Osychenko, Director of “Mariupol Television”, moved to Mariupol from Donetsk after the events of 2014. He has remembered the actions of ruscicts since that time, so this time he reacted instantly – the team was forbidden to gather in the premises of the TV company, unmounting of the broadcasting hardware was held. He thought it would be like in Donetsk: if the occupiers captured the city, they would post their Gauleiters and start broadcasting their propaganda. To break such a plan, the media workers unmounted the equipment, and the three most important matrix boards, without which it is impossible to broadcast, were hidden in three different places.

Employees went home to work with the use of the remaining resources, being focused on the website and social networks.

When the electricity was lost, the sirens of the air raid warning stopped working. So Mykola found out information from the Ukrainian military and warned people through a Telegram channel. All broadcasters of Mariupol (Mariupol Television, TV7, Sigma, Donbas) instantly disseminated information in their chat rooms.  “I hope we have saved someone’s life,” says Mykola now.

The journalists filmed and mounted videos of all the horror of the russian bombing on their phones. While there was mobile communication, they were posted on the website and on social networks. However, this did not last long. When the cell phones went silent, communication with our military was cut off.

Later during the hard fights in Mariupol, information was passed on through people. Mykola was visited by acquaintances for food, after Donetsk he always kept a supply of water and food, so now he shared his supplies. People told what and where they saw, what they heard. Instead, they learned the news from Mykola.

Osychenko lived in the downtown of Mariupol in a ten-story building, on the upper floors connection could be caught. Mykola published blogs every day in which he told what was happening in the city. At the same time, he was looking for his colleagues by noticing whether someone appeared online.

With his blogs, you can feel how the war came to Mariupol. Mykola told about what he had seen. In the first days of the war, Mariupol residents rescued residents of the town of Sartana, who were evacuated due to the racist invasion.

The streets of Mariupol. Photo from MTV reports, March 2022

About the first shells started arriving in the city. About the death of a schoolboy who was killed by a russian missile in a park. About how the people of Mariupol could not use the “green corridor” because the russians fired on cars and they returned – with shot doors, broken windows, covered with earth from explosions. 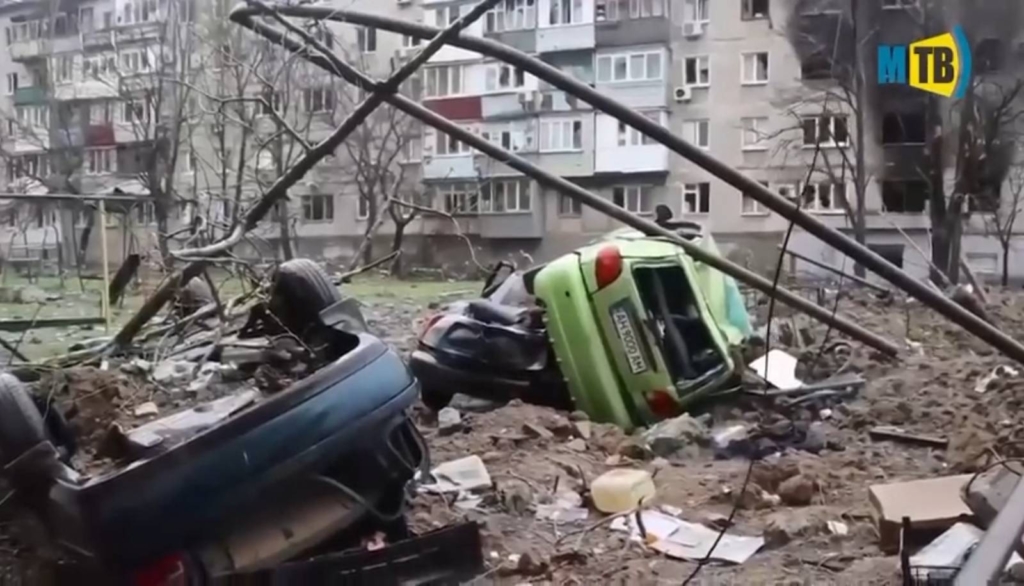 Broken cars in the streets of Mariupol. March 2022. Photo from MTV reports

It was dangerous to drive in Mariupol – Mykola witnessed how a family with a baby had to be evacuated only in an armored vehicle. Not only to drive, even to go for bread was a mortal threat. The shops were smashed in the first days of the war and people were looking for food somewhere. One day the shells flew right in the line for bread. His neighbour was in that line, about ten people were killed, and he received shrapnel wounds. He reached the yard on his own and fell exhausted in front of the entrance to the block of flats – the residents picked him up and saved him. A humanitarian catastrophe began in the city.

There was no light, no gas, no water. People broke down windows and doors to chop them to firewood – they heated and cooked food in the yard. This was happening under constant fire from russian aircraft. Mykola Osychenko had his own sign: “If you hear the sound of the plane , it means that there will definitely be an explosion, and you pray not to have it near”. There are no whole buildings left in Mariupol. There were so many dead people in Mariupol that they were buried in courtyards. 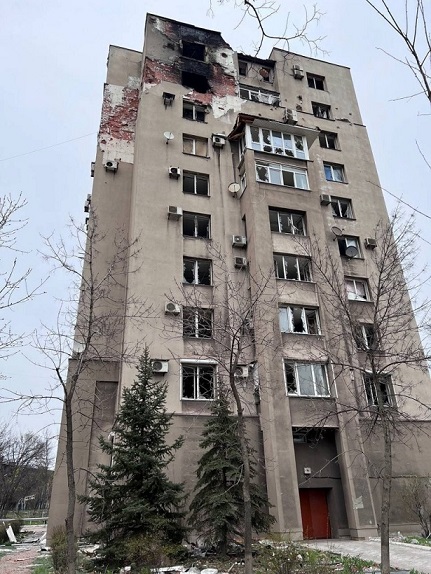 On March 13, three rockets fell near Mykola’s residential building, windows and doors were blown out in the apartments. It was saved by the fact that under the high-rise building there was an underground parking – people hid there. Fortunately, the cars of the residents have partially survived.

On March 15, the Director of the channel and four other families packed up and drove to Zaporizhzhia. In order not to be captured by the ruscicts, he threw out his ID, invented a “legend” and warned his relatives – he is the director of hockey broadcasts. Before the war in 2011-2012, Mykola really took care of the broadcast of hockey, and in Mariupol his channel broadcast matches of the local hockey club. To have a convincing look, he wore a cap with the inscription “HC Mariupol”. It later became his mascot. 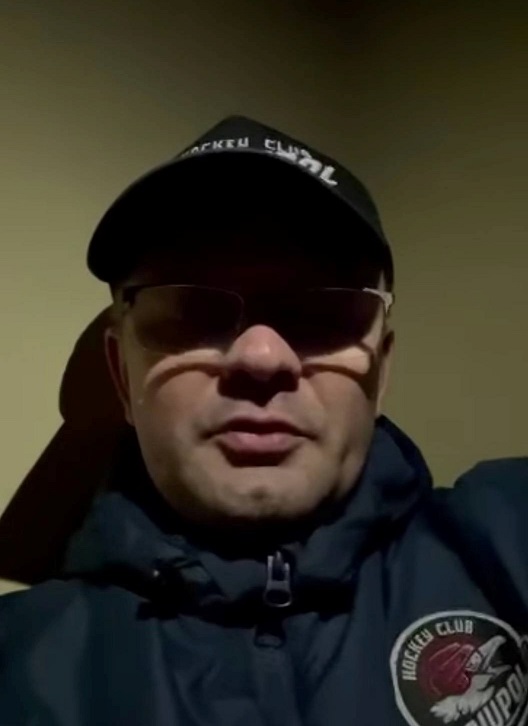 The journey to Zaporizhzhia, which usually lasted 2 and a half hours, lasted 15 hours. There were 20-25 Russian checkpoints and each inspection at each of them. The r ruscicts searched the documents, looked for traces of weapons, but nothing about the work.

Having escaped to Zaporizhzhia, Mykola first of all called back among his employees – who got out? The number of survivors was constantly changing. Half of 89 persons responded, later – more. As of this time, Mykola does not know the fate of four of his employees. They stayed in Mariupol. The others got out and are alive. 80 percent are in Ukraine and Europe. The other part is in Russia. Some were taken out by the occupiers, some went to relatives. “I will contact them, if they are with Ukraine, we will try to pull them out, we will work; and if not, we will say goodbye forever.”

Mykola assembled a team of 18 people out of those who left for Zaporizhzhia. He calls them “seals” because they perform the most difficult tasks. They work on social networks, develop the site, shoot stories of those who managed to escape from the russian occupation. Mykola actively comments on the situation to foreign media, tells the truth about Mariupol. 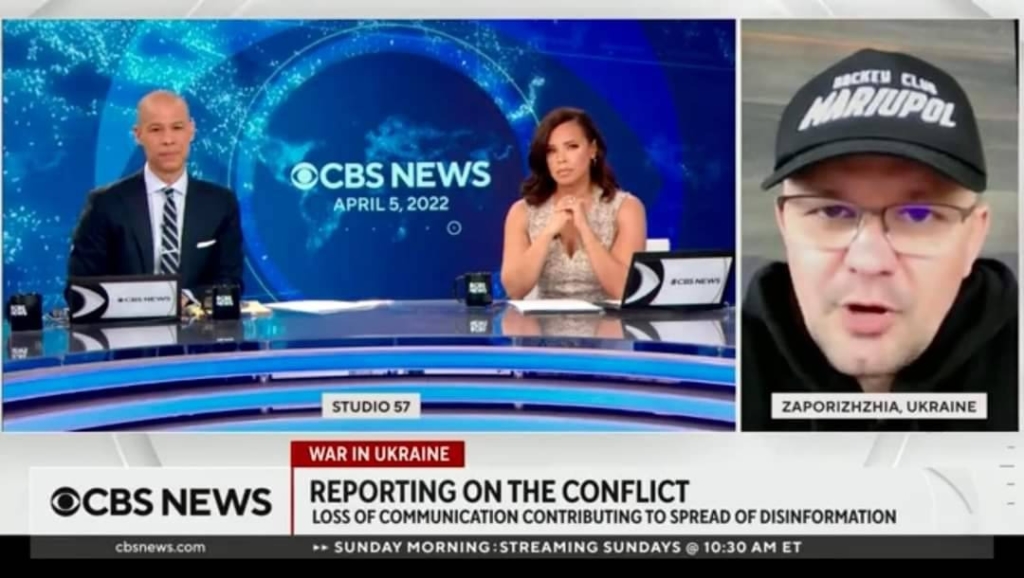 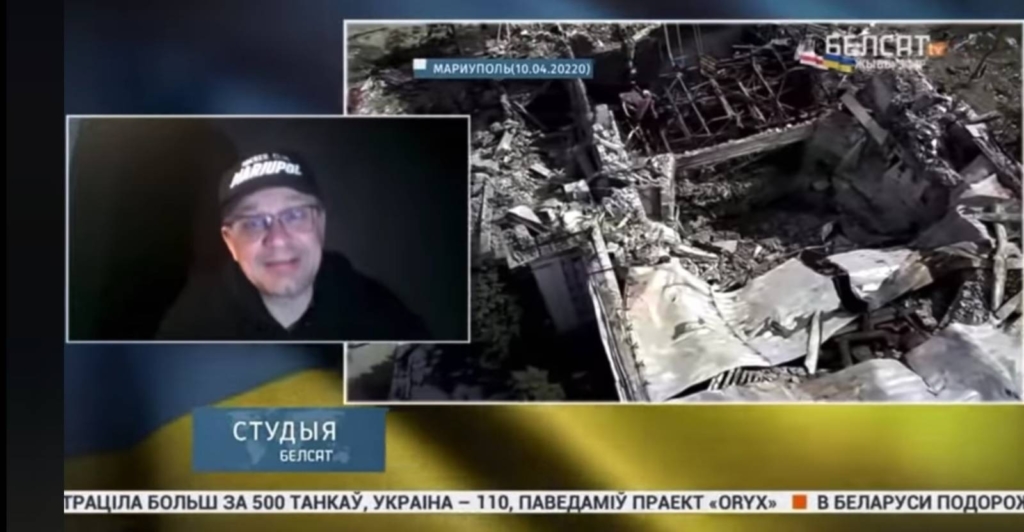 MTV Director comments on the situation in Mariupol for foreign media

Colleagues from Ukrainian channels helped media professionals to survive difficult times.  “TV5” from Zaporizhzhia, “34 channel” from Dnipro, channel “Ukraine” provided their premises and equipment to the “seals” from Mariupol. 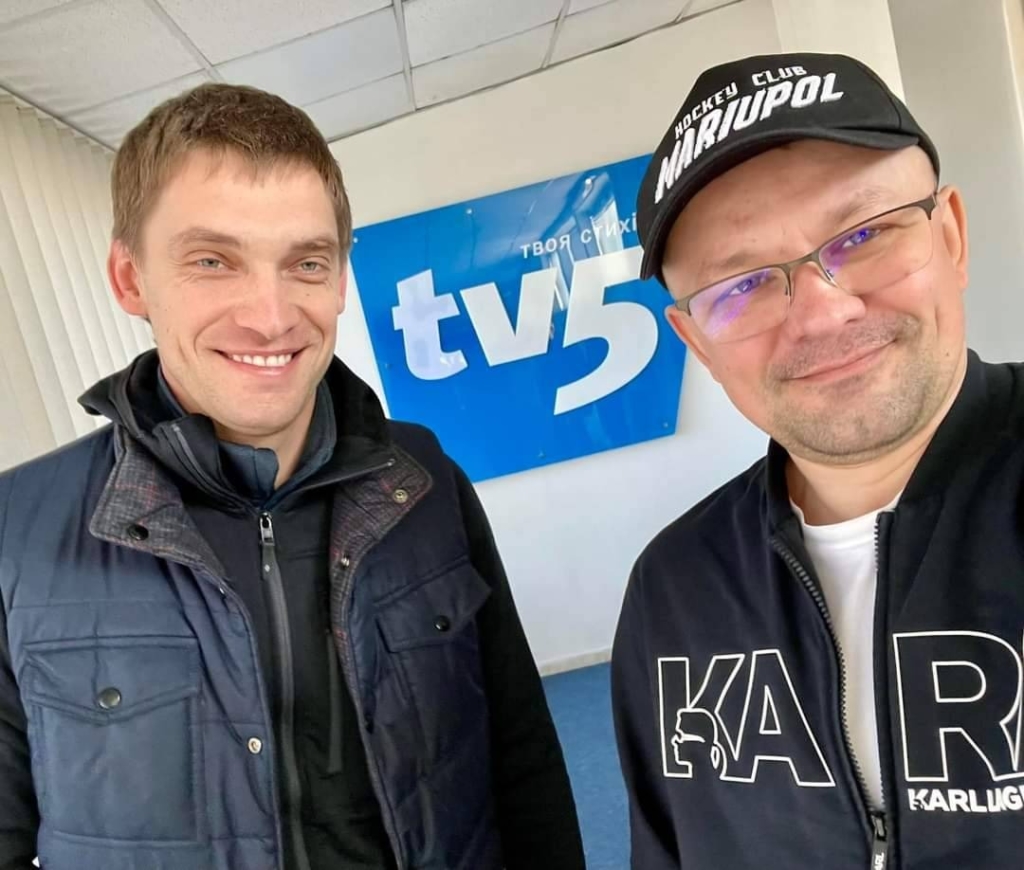 The occupiers in Mariupol are trying to create their own russian “Mariupol TV”.  “The team of traitors. It is not known who they will recruit there to shoot plots. They will create a picture for the russians. There is a mobile TV station left in the city, ruscicts are likely to use it. However, there is not much sense from it now, perhaps, they will drive for a picture, because this car says “Mariupol TV” in russian. 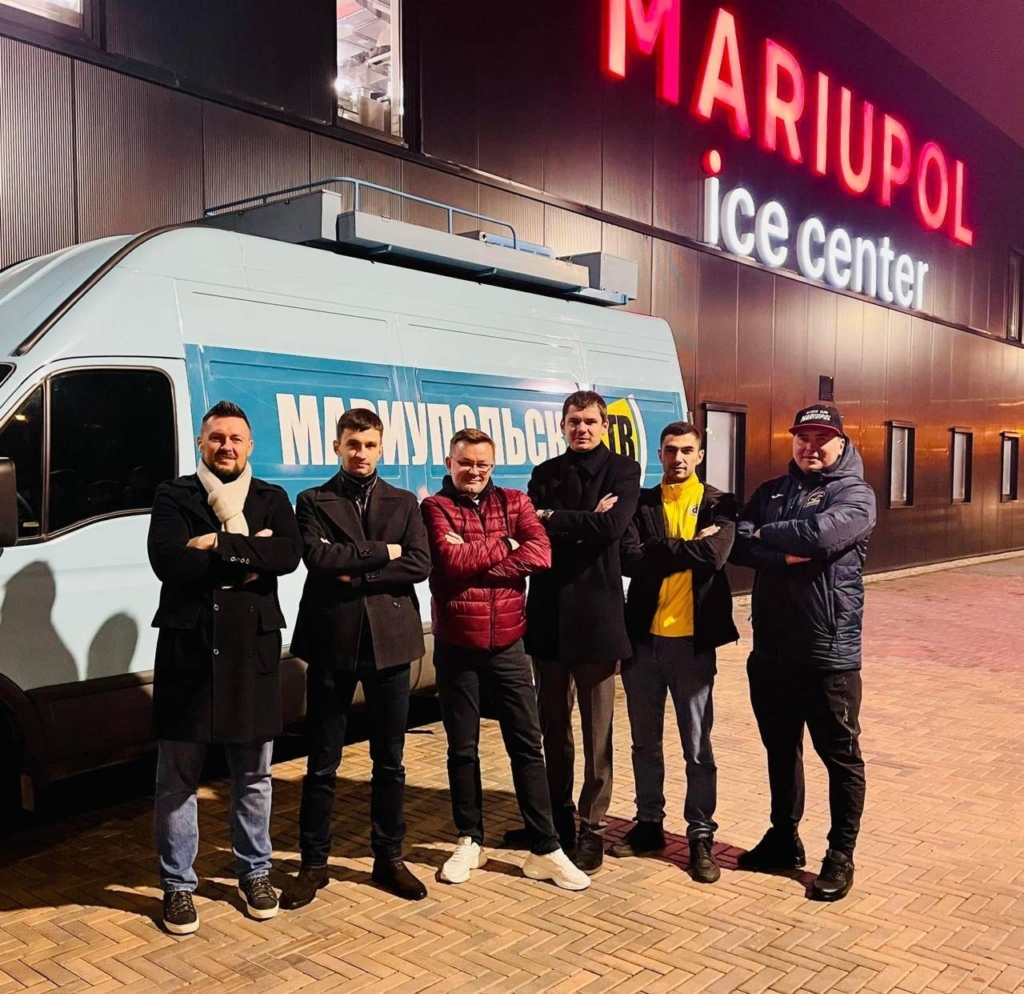 The MTV crew near a mobile TV station

Today, the real Mariupol Television is not only the media, it is also an important social fact-checking project. The TV professionals carefully check all the videos they receive from Mariupol and find on social networks, they identify people – who is alive, where they are. This information is then passed on to relatives and volunteer organizations. The TV “seals” has also direct contact with the defenders of the city and say: russian propaganda is lying. Mariupol has not given up!