In the regions the volume of programmes in Ukrainan on the radio exceeds the quota by 36 percent on average, the volume of songs - by 21 percent - Національна рада України з питань телебачення і радіомовлення

In the regions the volume of programmes in Ukrainan on the radio exceeds the quota by 36 percent on average, the volume of songs – by 21 percent

In the second half of 2021, the National Council monitored the observance of the language quota by 148 satellite, regional and local TV companies, as well as by 238 regional and local radio companies. The Member of the National Council Maksym Onopriienko said that 16 586 hours of TV airtime and 5 703 hours of radio airtime were analysed during monitoring. 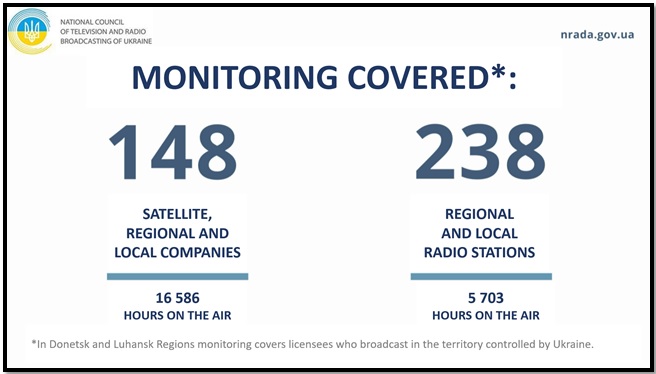 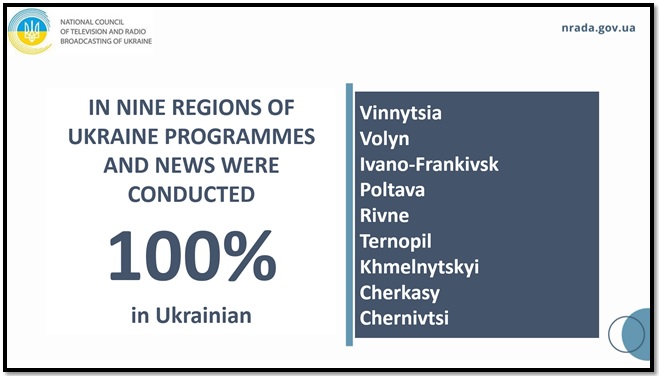 The average percentage of the Ukrainian language on TV in other regions is also high. For example, in Chernivtsi, Lviv, Zhytomyr Regions, as well as in Kyiv, it amounts to 99%. In Kirovohrad and Sumy Regions – to 98%. In Luhansk, Dnipropetrovsk Regions – to 96%. In Mykolaiv, Zaporizhzhia Regions – to 95%. In Kherson Region – to 94%. 93% – in Kharkiv and Zakarpattia Regions and 92% – in the Autonomous Republic of Crimea. TV programmes services from Odesa Region managed to reach 90%, Donetsk Region – 89%. The lowest indicators of the Ukrainian language was recorded in Kyivska Region, its average share in TV programmes amounted to 87%.

The National Council did not recored any violations of the language quota on TV in the second half of the year. During monitoring of regional and local radio stations, the National Council checked the compliance with the requirements of parts 2 and 5 of Article 9 of the Law of Ukraine “On Television and Radio Broadcasting”. These provisions establish a mandatory share of broadcasting in the state language of ≥60% and the daily share of songs in the Ukrainian language of ≥35%. 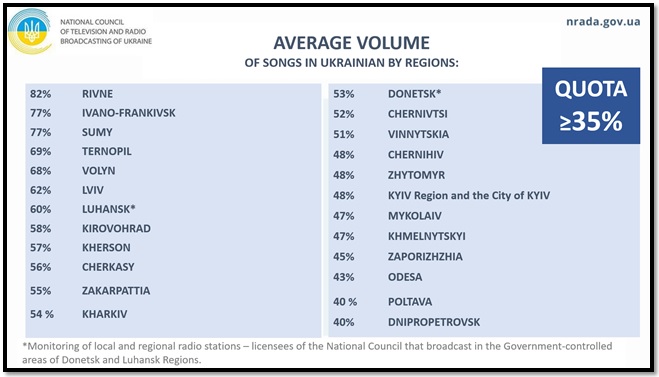 The state language in programmes during this period exceeded the mandatory quota by 36%, its average volume was 96%. The highest volume of Ukrainian – 100% – was recorded in the broadcasts of radio stations in Chernivtsi, Poltava, Rivne, Volyn Regions. At the same time, the lowest rate of the state language was heard in the programme services of Mykolaiiv Region – 82%. 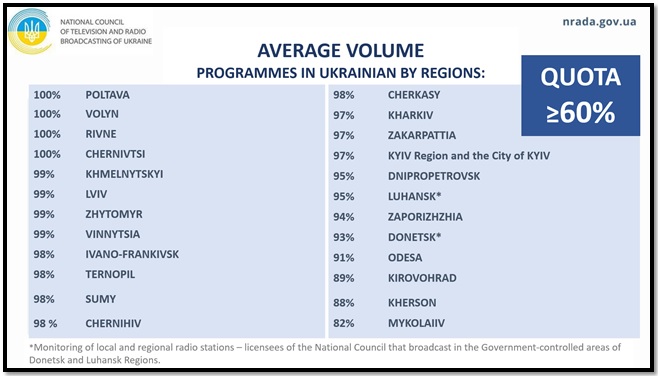 The violations of the language quota legislation during this time were recorded by the National Council in the activities of only one licensee – the LLC “ARTA PLUS”, the Town of Izium, Kharkiv Region (“Radio Class” call signs). The radio station did not perform the obligatory share of songs in Ukrainian – in its daily broadcasting the share amounted to 34.88%; in the period from 07:00 to 14:00 – 28.26%, and in the period from 15:00 to 22:00 – 33.04%. These violations entailed the penalty sanction for the licensee imposed by the National Council. It should be mentioned that during monitoring in early 2021, the Regulator also recorded the signs of violation of this legal provision by a broadcaster from Kharkiv Region. 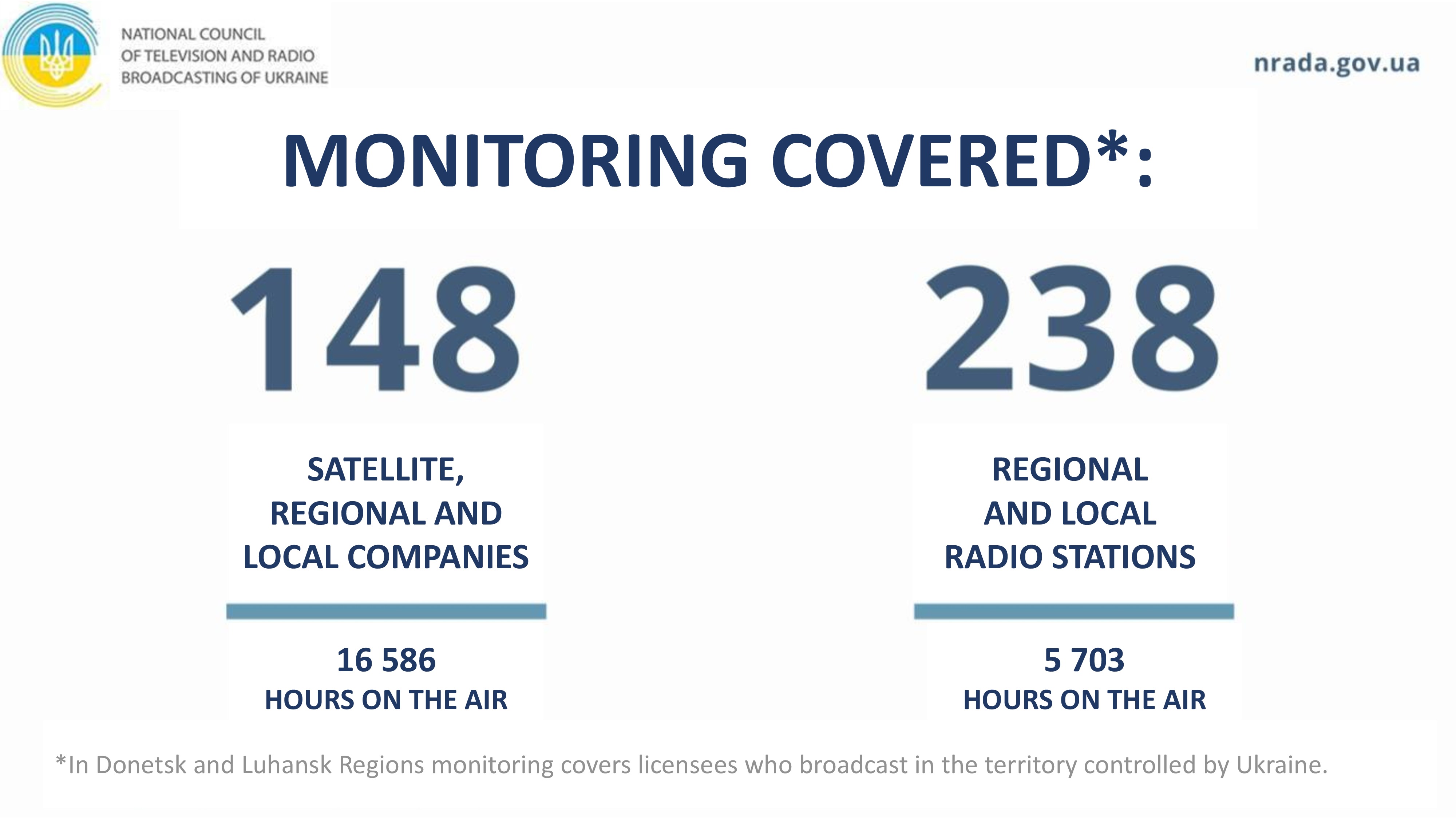 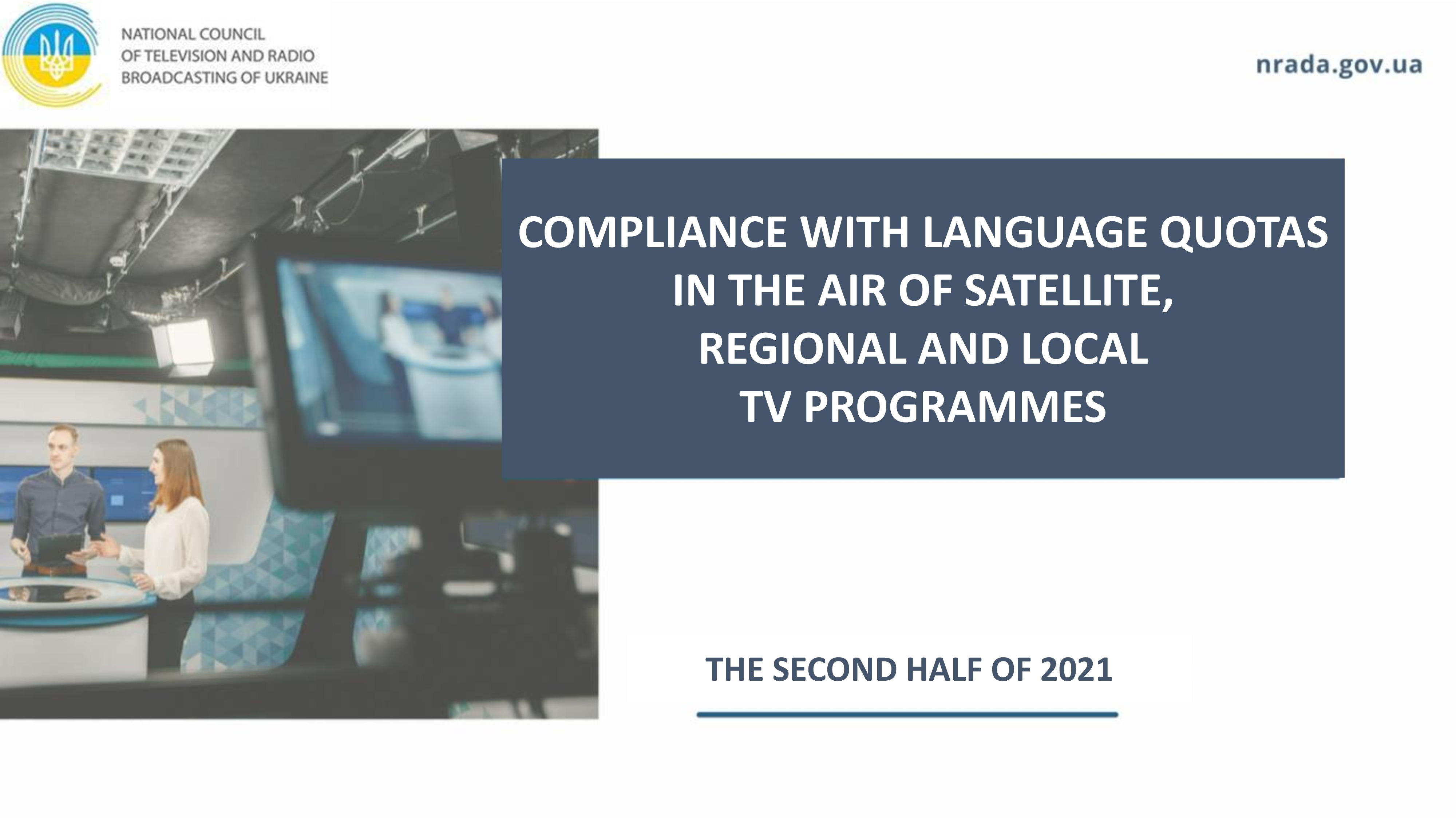 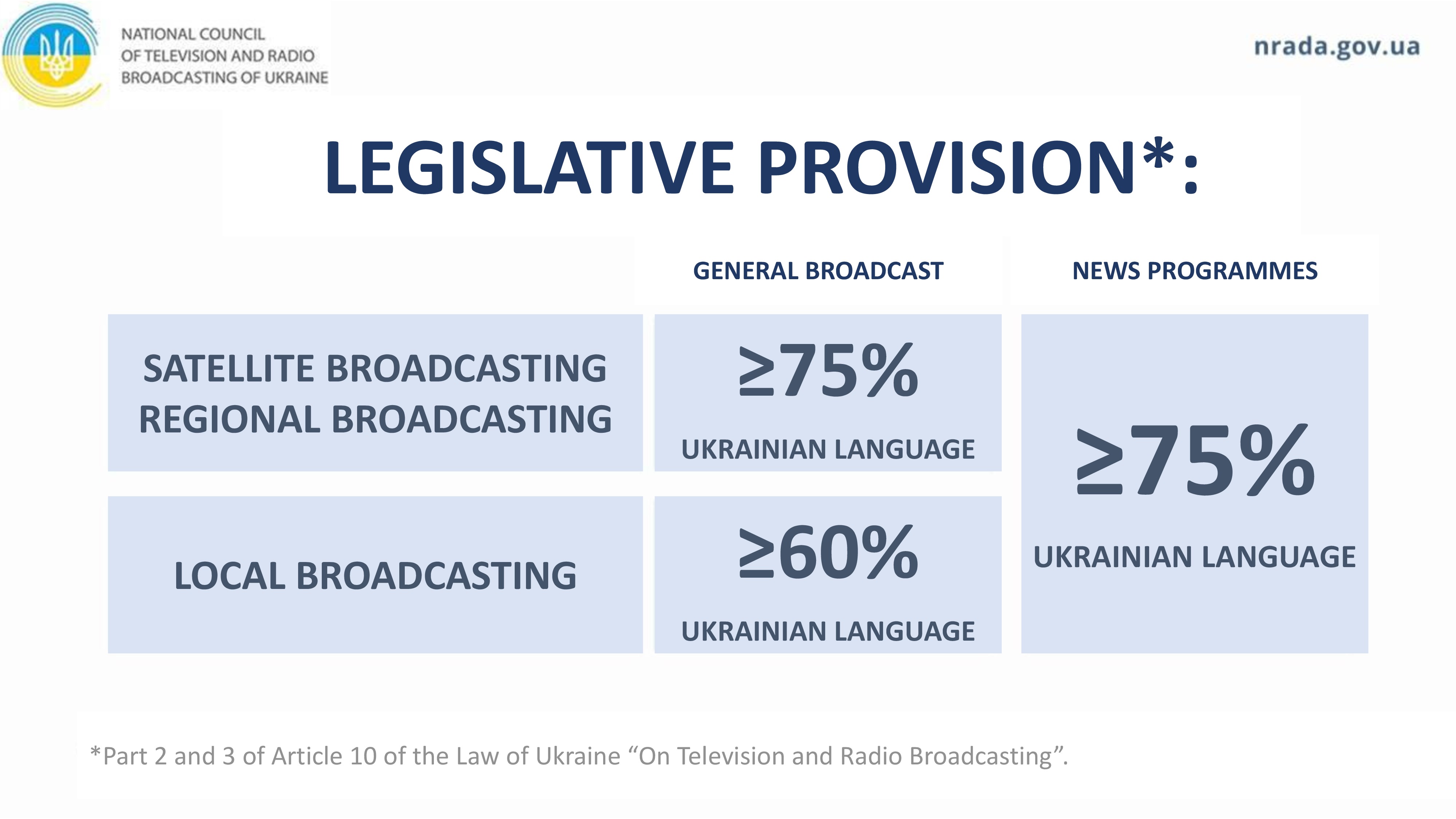 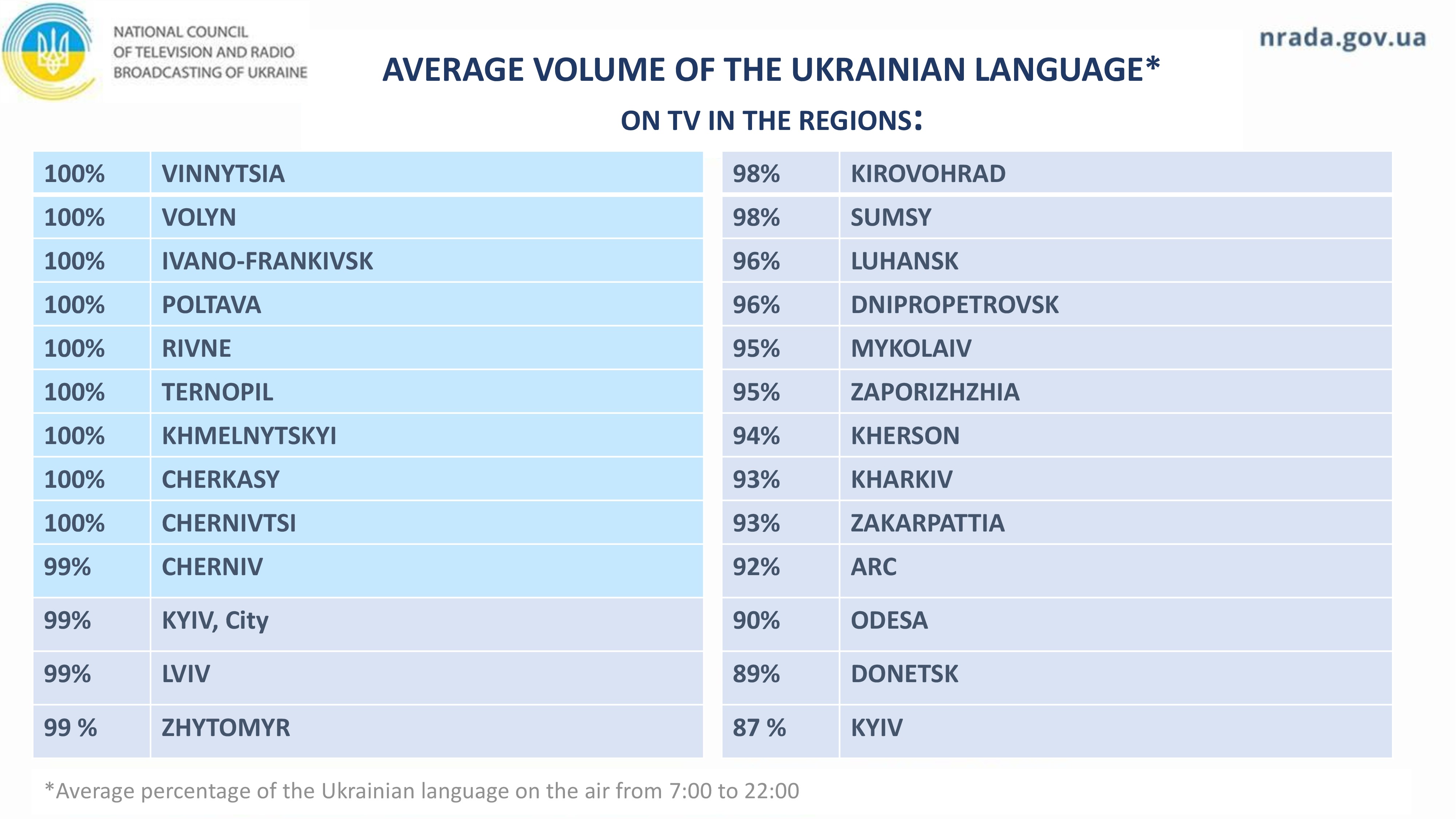 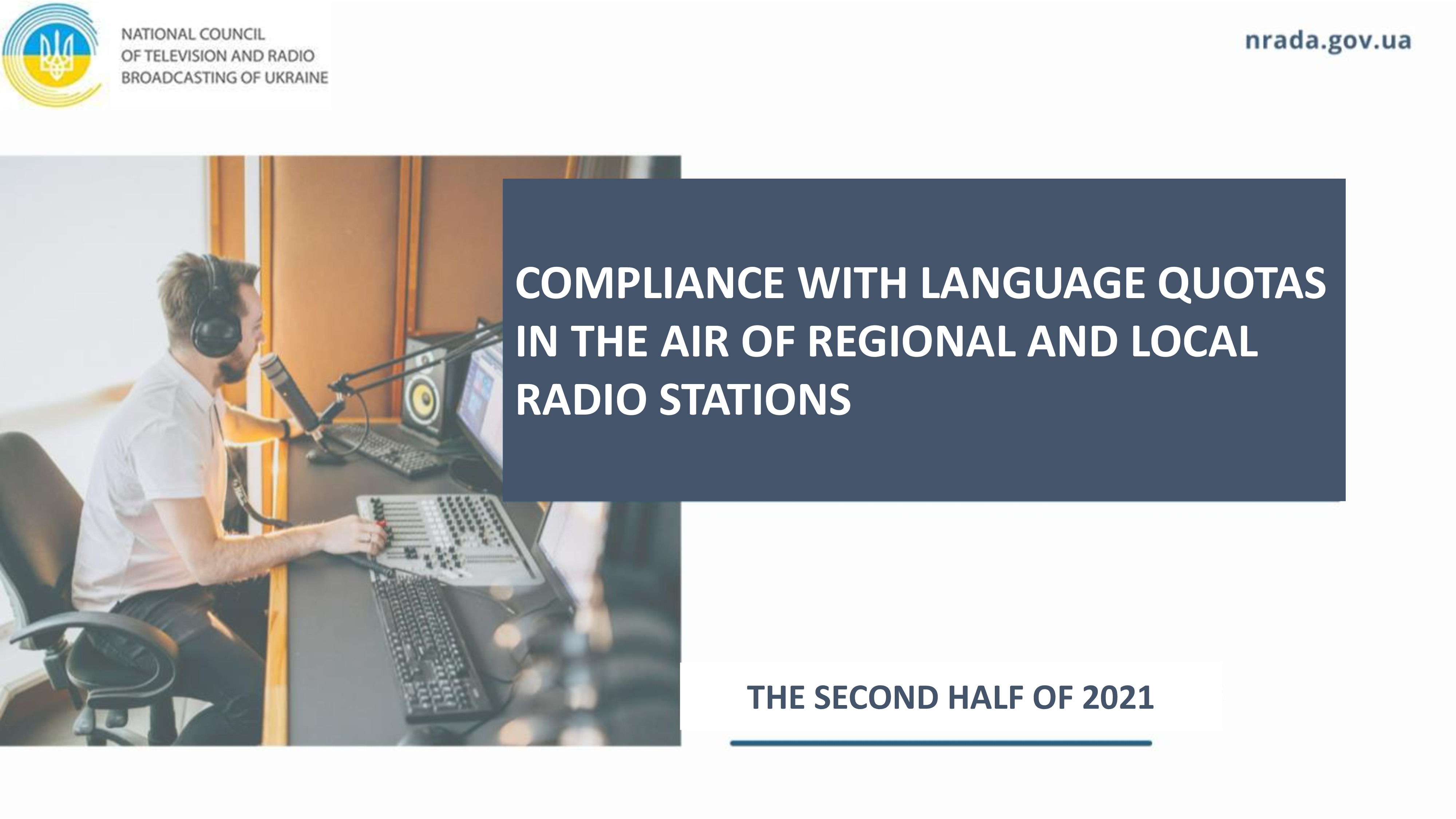 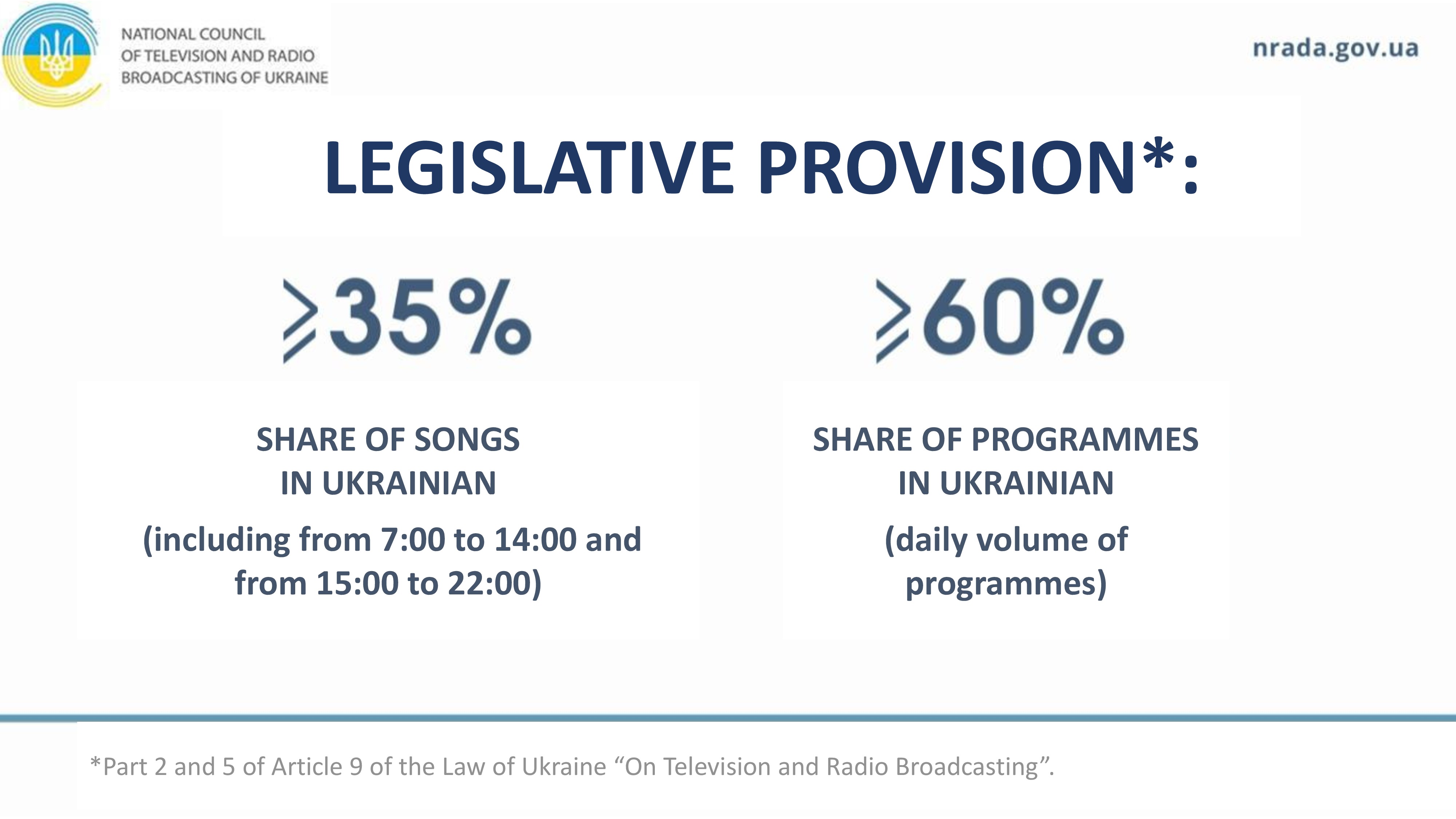 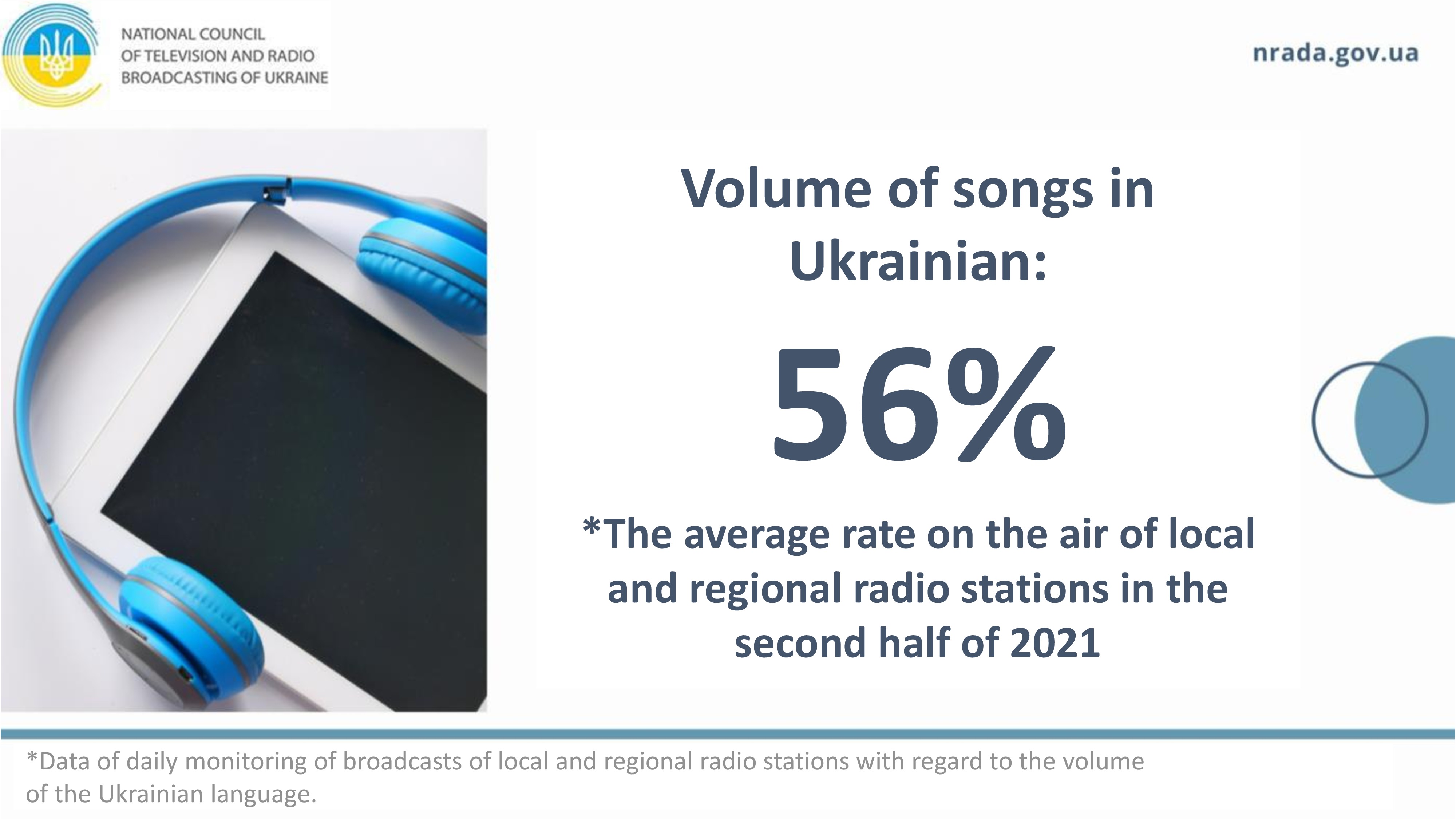 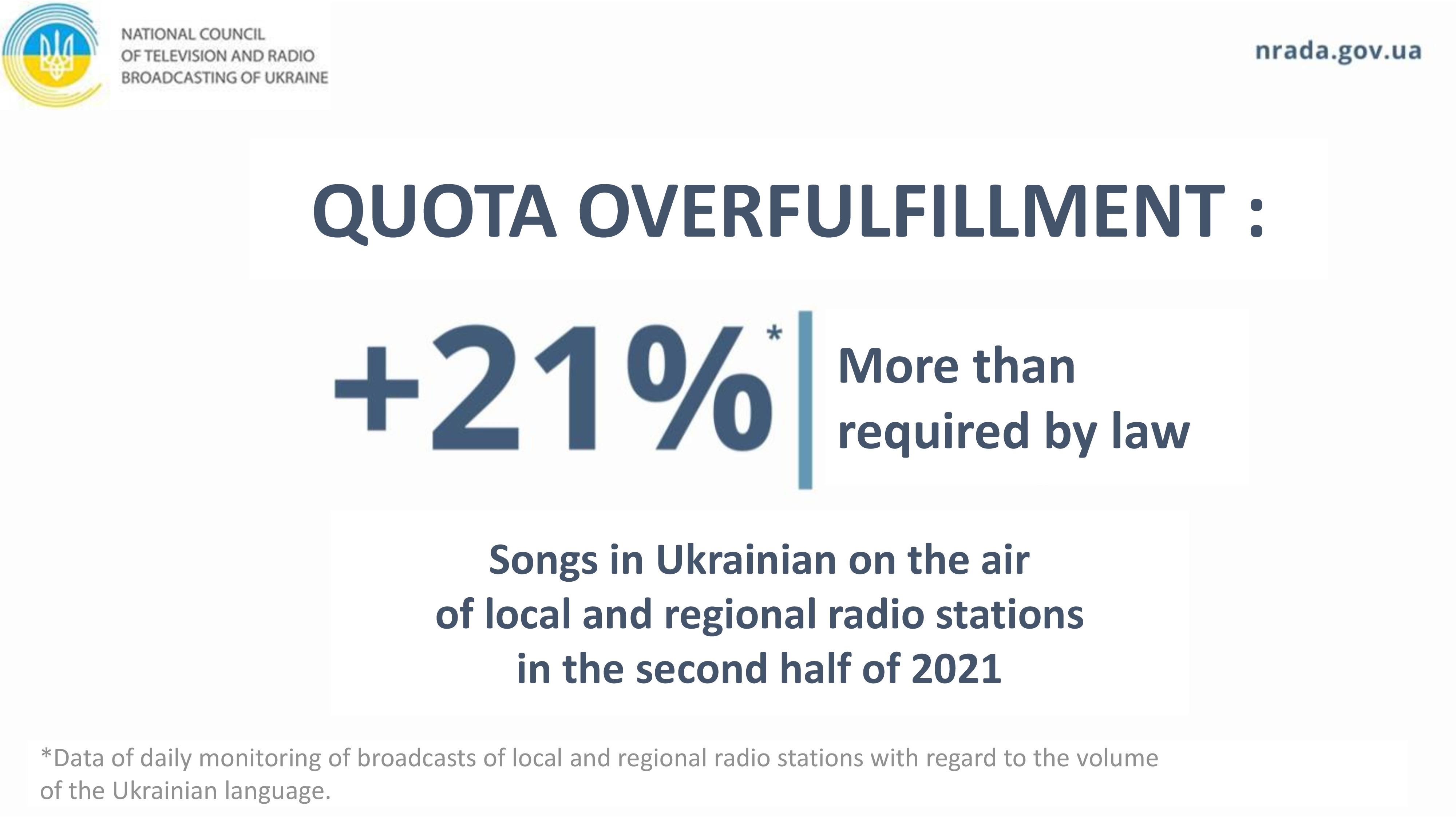 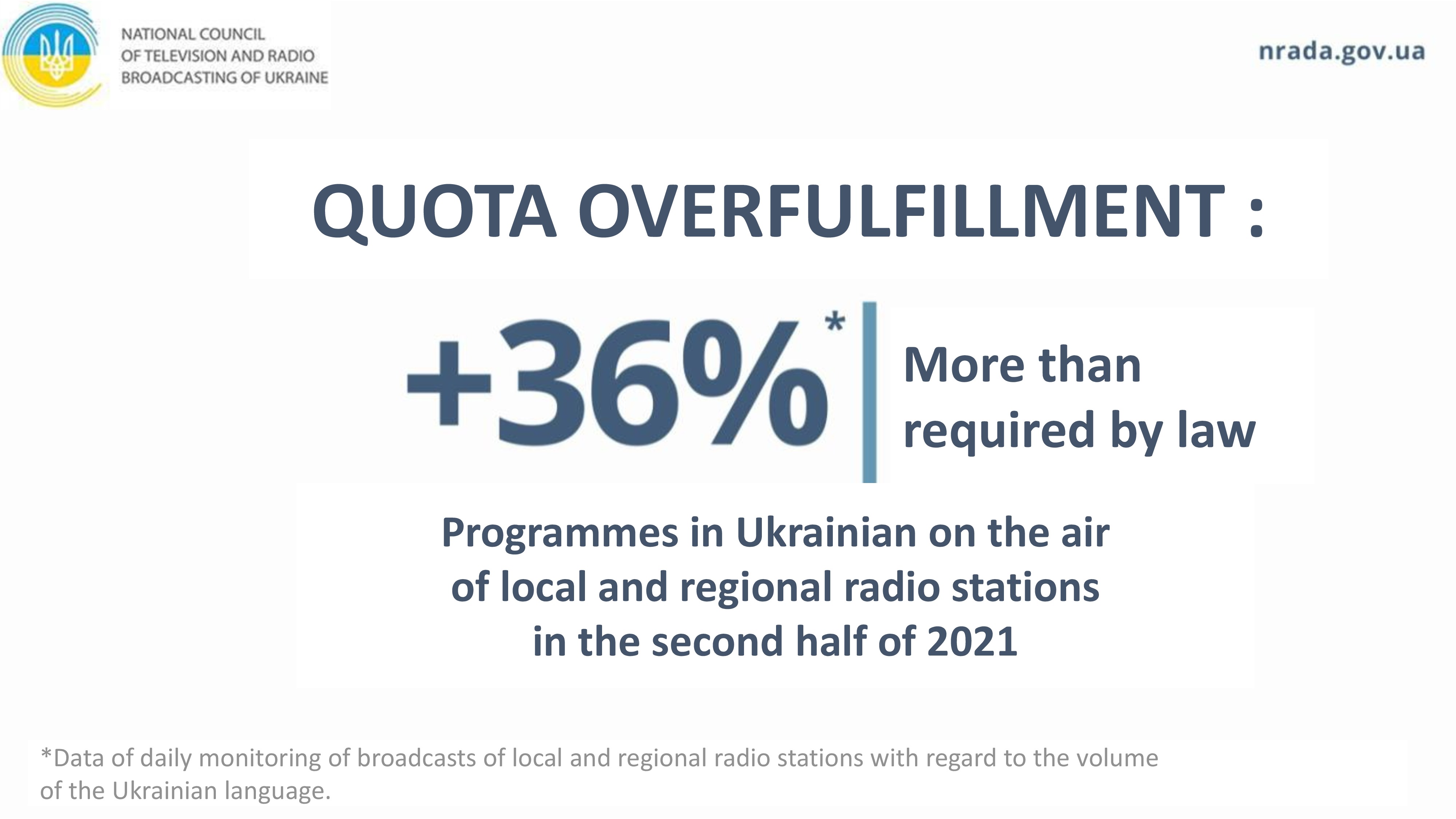 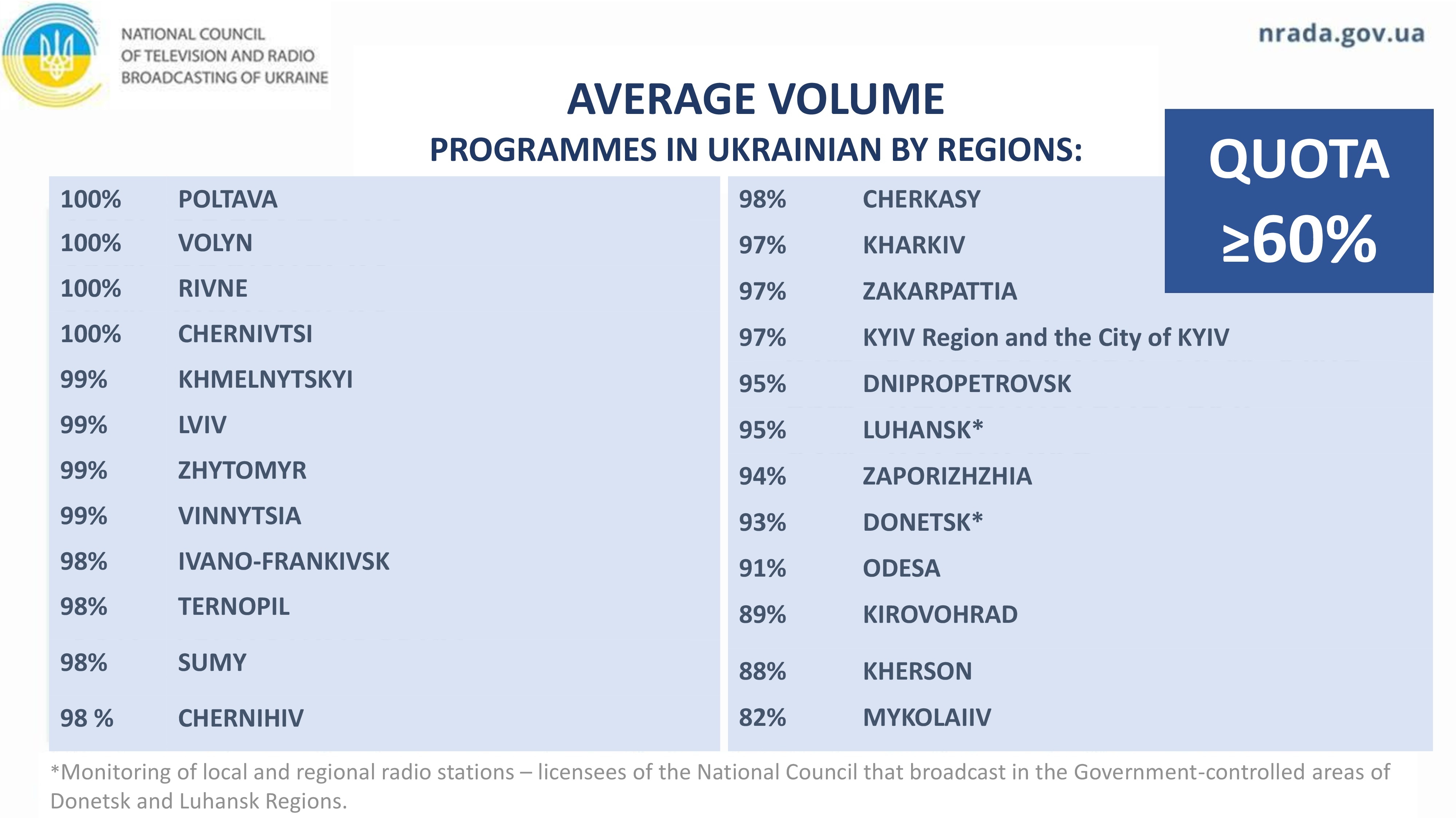 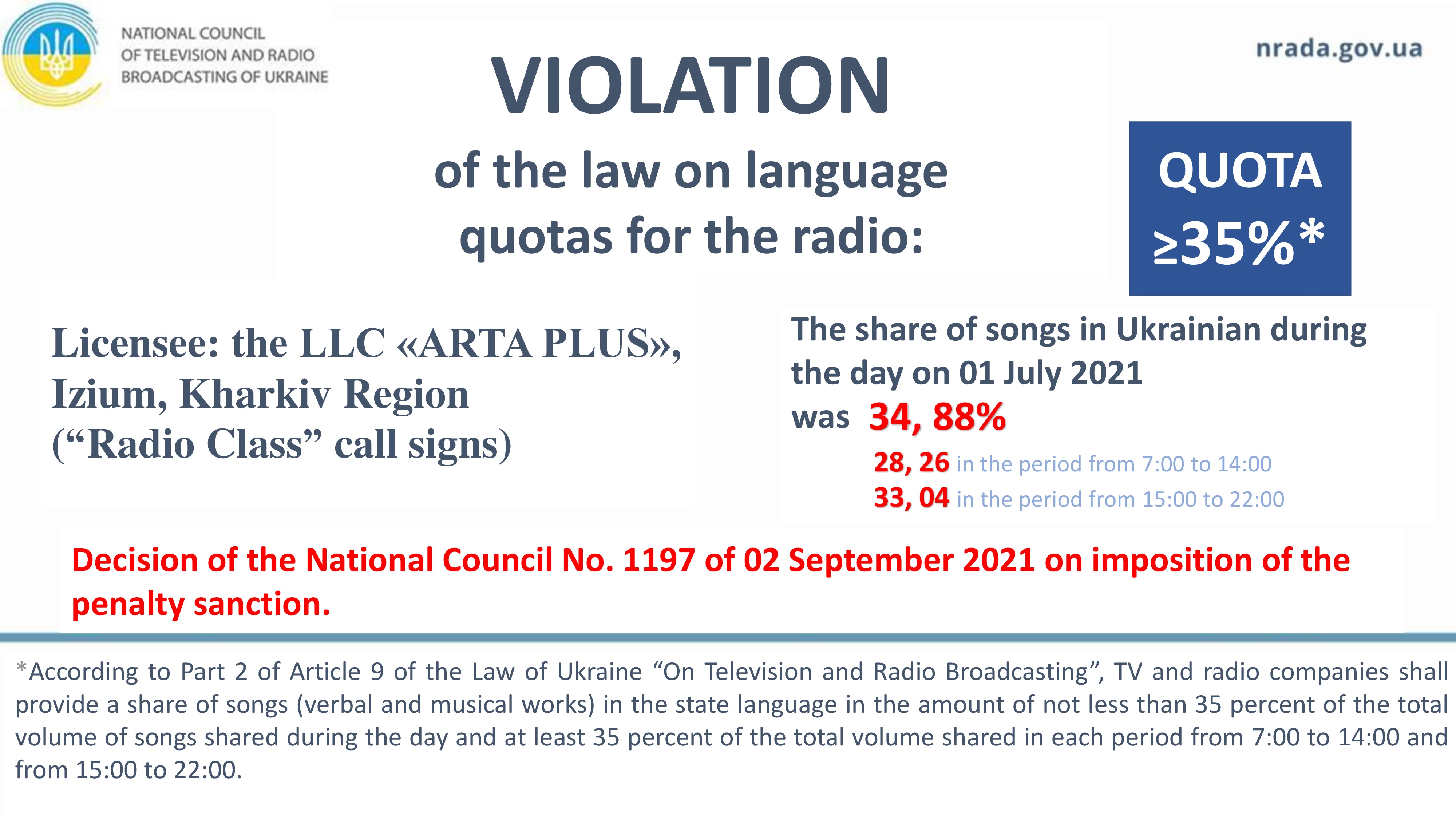