During the New Year holidays – December 31, 2018 and January 1, 2019 – the National Council monitored 12 nationwide television channels in the digital broadcasting standard to analyze the advertising and sponsor rolls of alcoholic beverages. These channels include “Inter”, “STB”, “Novy Kanal”, “Channel 5”, “M1”, “TET”, “1 + 1”, “Ukraine”, “K1”, “NTN”, “ICTV”, “UA: First”. The results showed that TV and radio companies complied with the law on advertising of alcohol and of the Recommendations that the Regulator oversees in supervisory activities from October 1, 2018. 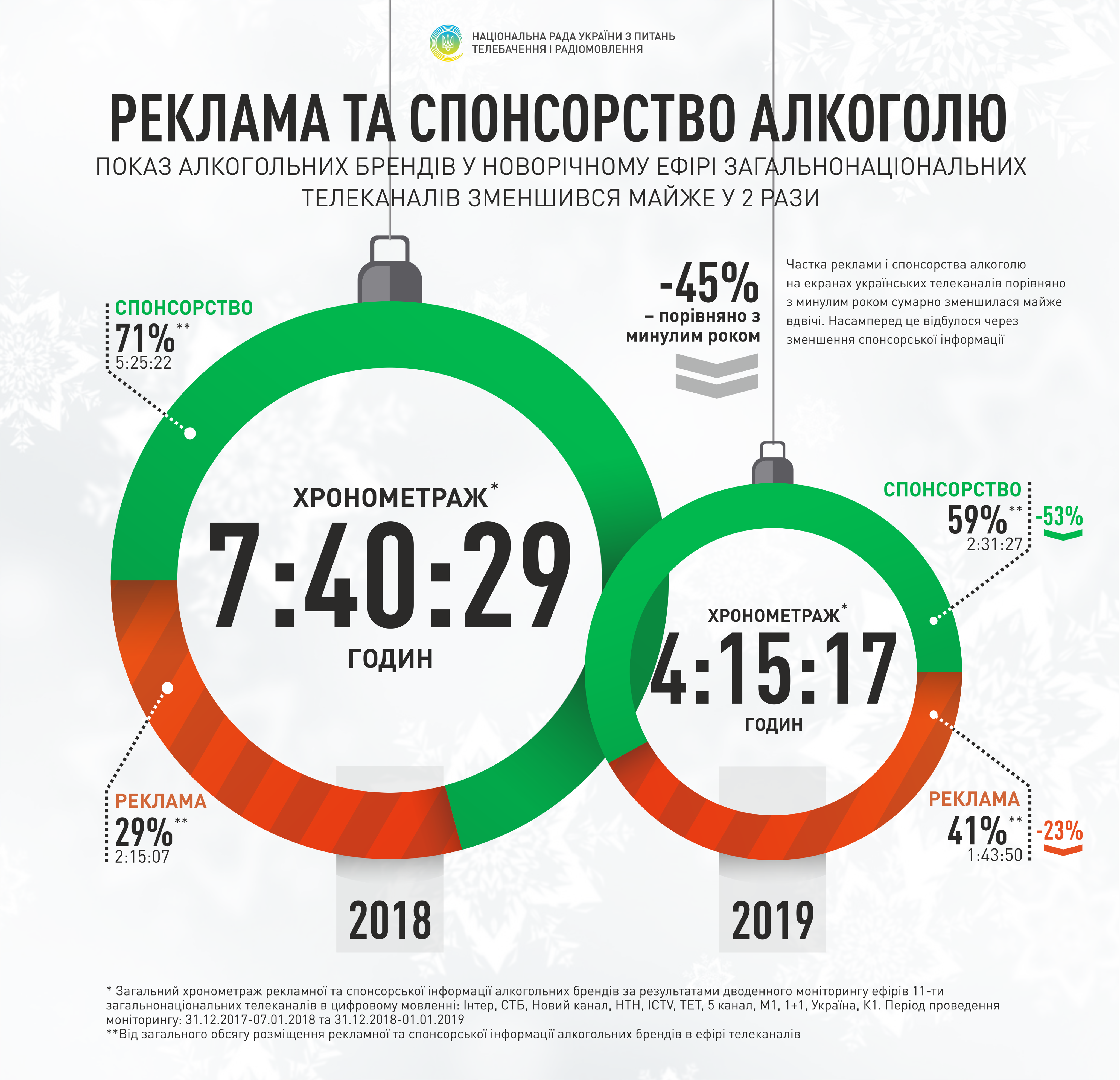 Moreover, in the total amount of advertising and sponsorship, the proportion of the broadcast with sponsorship information was 59%, which is 12 per cents less than last year.

“The monitoring results showed that the market is increasingly responsible for the advertising and sponsorship of alcohol brands, said S. Kostinskyi. – Broadcasters not only joined the development of methodological recommendations for the placement of sponsored information on the television channels, but also ensured their implementation.”

The Member of the National Council added that “one of the indicators of positive change is that the proportion of sponsorship, which in no way is limited during the day, has diminished in favor of the proportion of advertising subject to severe restrictions.”

According to the monitoring of the National Council, sponsorship information at last did not repeat the content of advertising, as was often observed in past years. In addition, sponsored information did not contain statements and images used solely in connection with alcoholic beverages.

In general, over the period in which the monitoring was carried out, advertising and sponsorship materials of 27 alcohol brands were presented on TV. Before distributing sponsored information – the name and/or sign for the sponsor’s products and services – the sponsor status was marked with the words and or phrases “show sponsor”, “sponsor”, “partner”, “with support”, “with assistance”, “TM represents” and so on.

On the air of “UA: First” advertising and sponsored information on alcoholic beverages has not been recorded at all. As you know, Public Service Broadcaster has decided to abstain from broadcasting such materials.

Article 1 of the Law of Ukraine “On Advertising” stipulates that sponsorship is voluntary material, financial, organizational and other support by individuals and legal entities of any activity in order to promote exclusively its name, trade mark for goods and services.

According to part one of Article 5 of the Law of Ukraine “On Advertising” in television, radio broadcasts, materials in other mass media, which are created and conducted with the participation of sponsors, it is prohibited to provide any advertising information about the sponsor and/or its goods, except the name or the name and the mark for the goods and services of the sponsors.