On January 23rd the National Council presented the results of monitoring of six Ukrainian infotainment TV channels – “1+1”, “ICTV”, “UA:First”, “Inter”, “NTN” and “Ukraine”  – on their coverage of the armed aggression in Eastern Ukraine and of the occupation of the Crimea by the aggressor state. The monitoring was conducted in November-December 2017.

The monitoring volume for each TV channel was one week or 168 hours. A total of 1008 hours of broadcast were covered. The monitoring was conducted at the request of the Ministry of Information Policy of Ukraine. 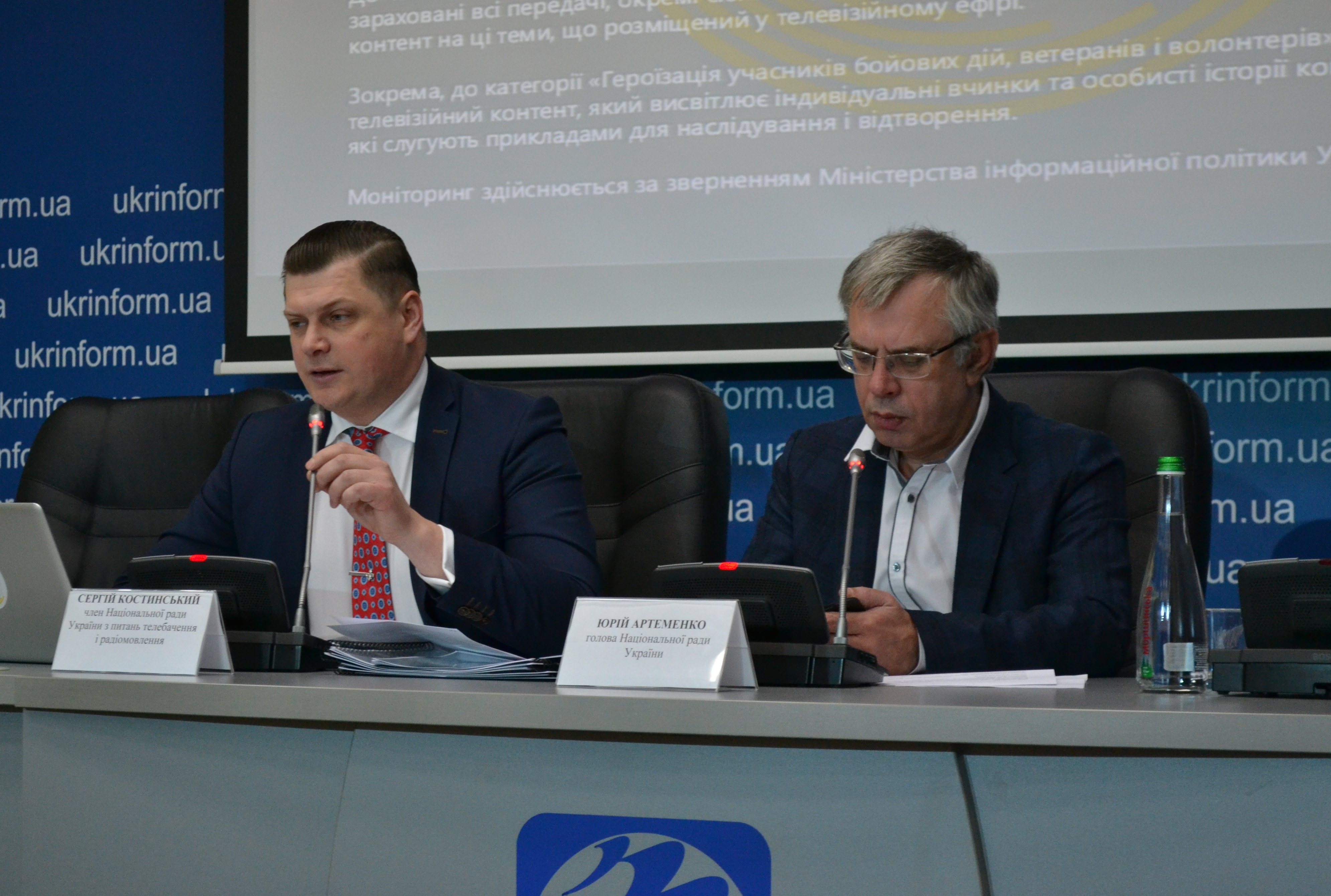 Compared to information TV channels (the first stage of monitoring of national information channels was conducted in August-September 2017) the share of the brodcast of infotainment TV channels dedicated to this topic is much smaller, namely:

The total volume of content on the situation in Eastern Ukraine in broadcasting of infotainment channels amounted to 22 hours out of 1008 hours of the total broadcast of TV channels.

On average 2.2% of the weekly broadcast of the TV channels was devoted to the situation in Eastern Ukraine.

The theme of the situation in Eastern Ukraine was more actively covered by the “ICTV” and “1+1” channels with the share of such content reaching to 4%. The TV channels “Ukraine”, “Inter” and “UA:First” dedicated less than 2% to the theme. No information related to what is happening in the East of the country was recorded on the TV channel “NTN”.

It is worth noting that the regional TV channel “UA:Donbas” is represented on the Public Broadcasting Network (“UA: PBC”), and in the “Media Group Ukraine” there is a regional television channel “Donbas” as well.

About 19% of the total airtime (4 hours 12 minutes 42 seconds) was statistical information about events in the ATO area.

We would like to note separately that the regional TV channel “UA:Crimea” operates in the system of “UA: PBC”. Moreover, the “Inter +” TV channel is available on cable networks in the territory of the occupied Crimea.

The highest attention was paid to the persecution of Ukrainian citizens in the Crimea and coverage of life in the territory of the occupied Crimea (88% of the total volume of the content on the theme “occupation of the Crimea”).

“Today there is a deficit in the coverage of the situation in Easten and Southern Ukraine,” said Member of the National Council Serhii Kostynskyi. –“Nowadays, unfortunately, in our opinion, the way these issues are covered does not correspond to actual events in the country. I am convinced that such news and such information should be prevalent. And it should not only consist of news, statistics, but also it has to elaborate more deeply and closely on what is happening to the citizens of Ukraine in the controlled territories, in uncontrolled territories, to internally displaced persons” he said.