The Supplementary Human Dimension Meeting (SHDM) II of the OSCE is being held on 22-23 June in the format of a web conference, during which participants are focusing on assessing the efforts made by participating States to address freedom of speech issues during the crisis. The National Council was represented by the First Deputy Chairman Mr Valentyn Koval.

The participants of the event were to review and assess the current challenges faced by OSCE participating States regarding freedom of information, freedom of expression and freedom of the media during the global pandemic caused by COVID-19, both online and offline, and to create an additional platform to exchange best practices for promoting these freedoms, including in a crisis situation.

Participating States discussed the current complex situation as one that not only presents a challenge, but also creates an opportunity for new, tailored and improved approaches to addressing issues of freedom of expression.

The sessions focused on the following issues: how the COVID-19-related crisis influenced the state of protection of freedom of expression; how OSCE participating States can effectively address challenges to freedom of expression and other fundamental human rights in the context of compound crises, and how could this best serve peace and security in the region; what opportunities and good practices exist in the OSCE region. The need for timely access to information online and offline for accountability in public policy was discussed. In particular, the following aspects were on the floor: whether limitations on access to information during the COVID-19 crisis can serve public health considerations (such as to avert direct threats to life and health) or exploit them for the interests of preserving public order and national security. The participants also talked about whether tools used today to protect public health could be found helpful in the ongoing efforts to find ways to counteract the general phenomenon of disinformation.

During the discussion Valentyn Koval touched upon the realities of Ukraine and expressed the opinion that there are risks that the use of anti-disinformation law might lead to narrowing freedom of speech.

“I want to stress that at the moment, when the sources of information changed from proven news agencies or respectful newspapers and newscasts to social media, and when ordinary people are at very low level of media literacy, we need to find and have a strong mechanism to react to facts of appearance of real disinformation.

There are two ways to reach this: to have a strong self-regulating journalism organization with right tools to correct untruth or attempts to mislead the public; and to have a strong ombudsman, like an authority that will be recognized by journalistic community and therefore will act as a watchdog in this area.

But the only way to make these institutions active and able to perform their tasks – is to have a special law that will establish the rules.” 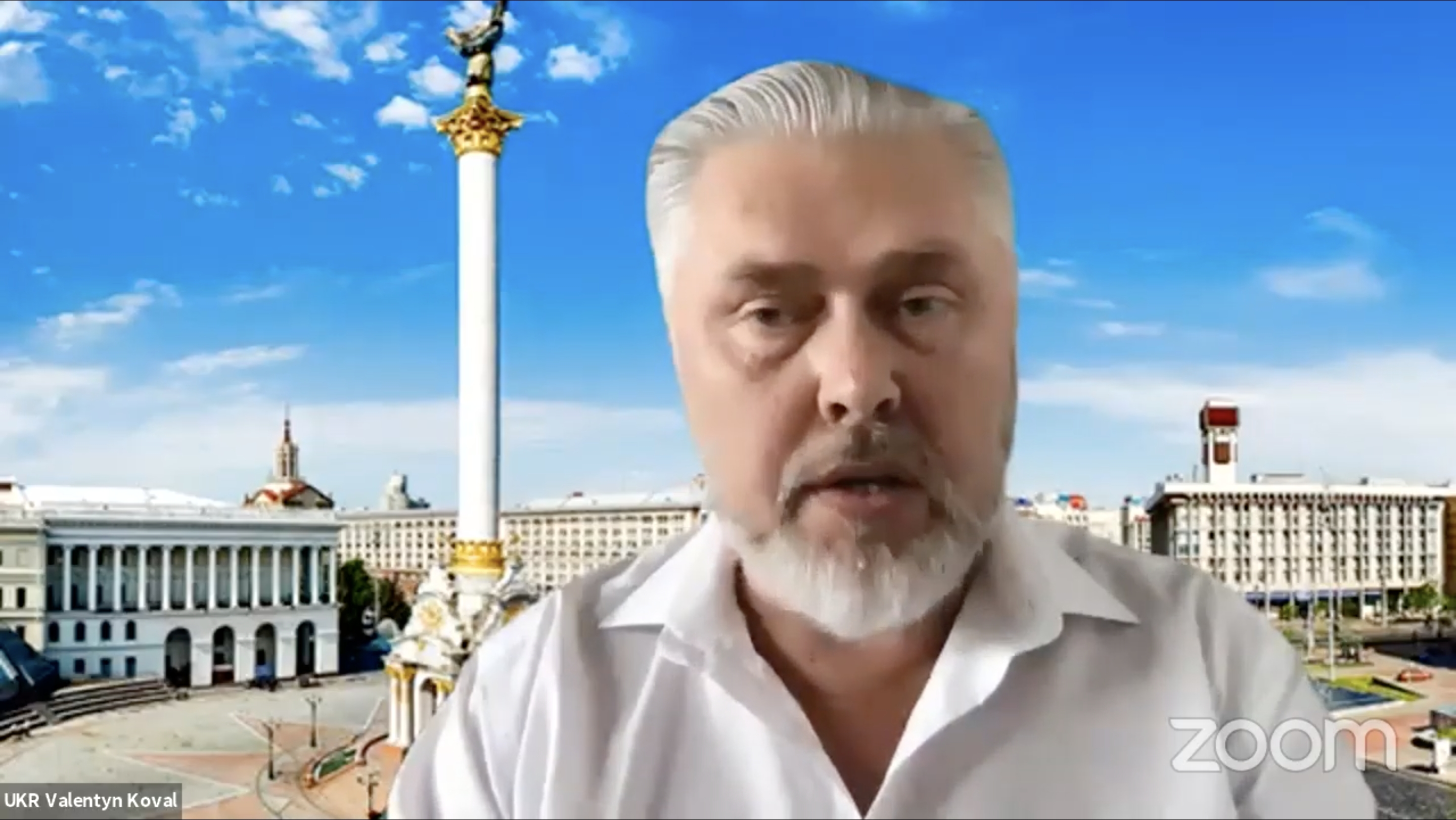 Mr Koval emphasized that upon his participation in several discussions around anti-disinformation law in Ukraine, and being a member of the working group on elaboration of a new Ukrainian law on media he noticed that there are just 2 groups of those who are struggling against this approach: those who use current unregulated situation to inject disinformation into the public space, and those who just feel certain fears based on their negative experience in close past.

“But we need to understand that while we are feeding our fears, dozens of fake news appear on a daily basis in the Internet and later are used by biased media in their broadcasts. Society is very sensible now, and we need to defend it from any negative influence.”

Valentyn Koval also shared his impressions concerning the web conference by noting that, unfortunately, in recent years, at important European forums under the guise of the status of non-governmental organizations, the voices of collaborators from the occupied Crimea are often heard, insisting on “the first in history real trilingualism in Crimea” or telling about the illusory achievements of the use of the Ukrainian and Crimean Tatar languages in education and cultural life of modern Crimea. Ukraine’s representatives in international organizations firmly respond to such manipulations and are grateful to the international community, in particular the British, Croatian and Canadian Delegations, for their firm and steadfast stance on Russia’s aggression and support for Ukraine’s efforts to protect the rights and freedoms of Ukrainian citizens in the temporarily occupied territories. He thanked all those who support the position that Crimea is Ukraine and who help to make Ukrainian programmes available to Ukrainian citizens on the Crimean peninsula and in the eastern part of Donbass.

The discussions during the SHDM are aimed at production of recommendations to the OSCE participating States on upholding freedom of information, freedom of expression and freedom of the media when addressing current technological and other challenges, and regarding the possible roles for the OSCE institutions to support them in this process.