The First Deputy Chair of the National Council Olha Herasimyuk took part in the Council of Europe Regional Conference “Addressing hate speech in the media: the role of regulatory authorities and the judiciary” held on November 6-7 in Zagreb, Croatia. The event was organized in partnership with the Croatian Agency for Electronic Media. Croatia is currently chairing the Council of Europe. 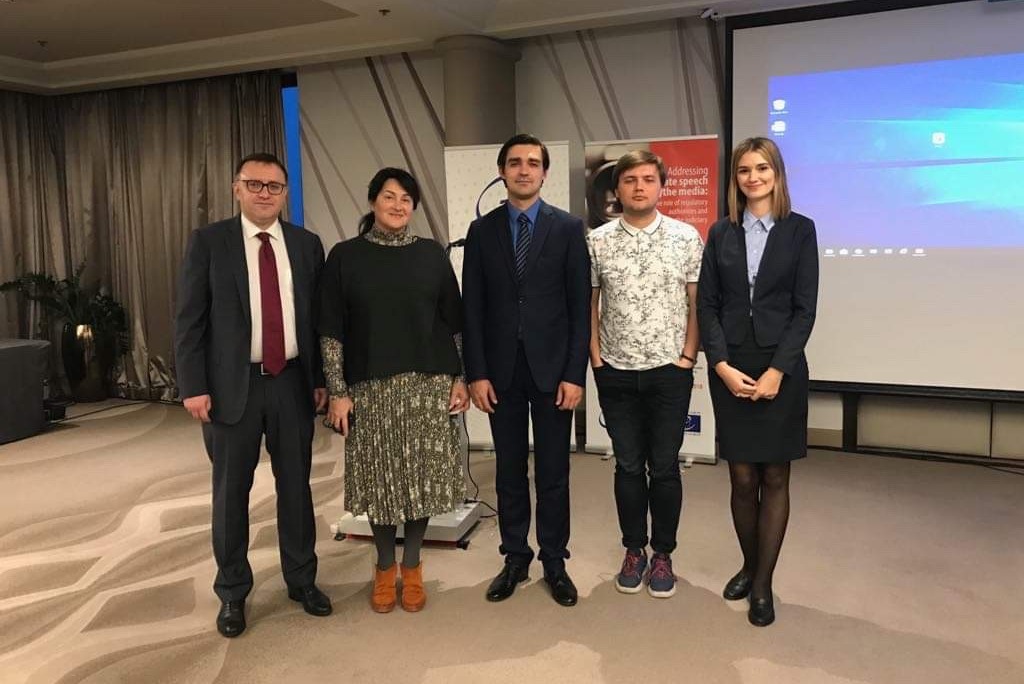 The conference was attended by representatives of embassies, regulatory authorities, ministers of culture, foreign affairs, representatives of the judiciary of member-states of the Council of Europe. Media experts from Ukraine Ihor Rokladai, Oksana Romanyuk and Maksym Dvorovyi, as well as Iryna Ostap from the CoE Office in Ukraine, are also taking part in the said conference.

Patrick Penninckx, Head of Information Society Department of Council of Europe, in his welcoming remarks stressed that the Article 10 of the European Convention on Human Rights guarantees the right to freedom of expression, but it also proclaims limits, such as duties and responsibilities. Therefore, “the purpose of the conference is to look at these duties and responsibilities from various aspects – of the regulatory, self-regulatory bodies, the judiciary etc., as well as to determine the contribution each of those can make to overcome hate speech,” he said. Opportunities and tasks of each of the parties were discussed during separate sessions of the conference. 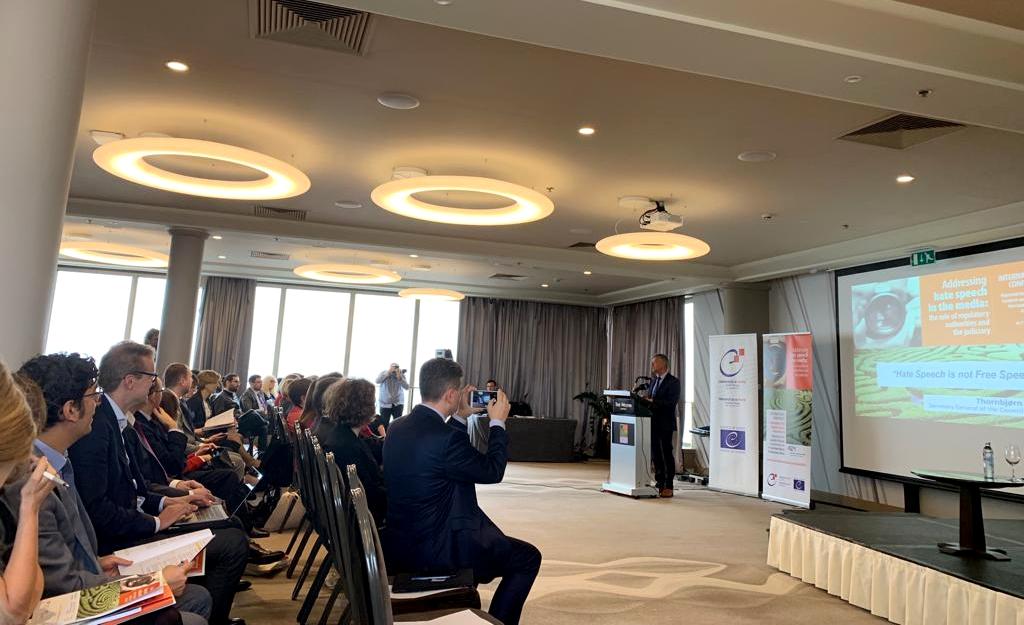 Hate speech is not the freedom of speech! – This was the main idea expressed by the participants of the meeting. Representatives of all branches of government, the information society and social networks have set the goal during the conference to analyze ways of spreading hate speech through politicians, media figures, all sections that affect societies, and seek ways to counteract the proliferation of hate speech at a time when many countries find populists at their helm. These strategies require joint and concerted actions by all stakeholders – national media regulators, media self-regulatory bodies, the judiciary and citizens.

Tanja Kerševan Smokvina, the Associate Partner at “Wagner-Hatfield” and visiting lecturer at the University of Maribor described the tools of protection from hate speech that regulators in the member states of the Council of Europe have, the limits between permitted and prohibited, the definition of the very concept of “hate speech”, the strategies and initiatives that can be used to overcome these phenomena. She provided examples of the ways in which regulators in European countries react to the spread of hate speech. The following cases and sanctions were recorded: 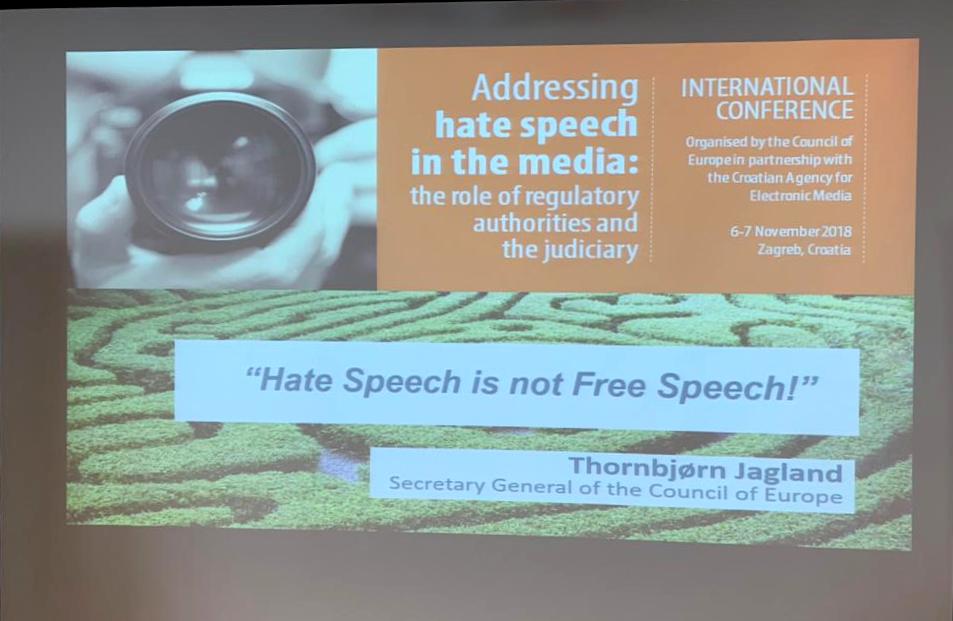 Gabriella Cseh, Director of Policy for Russia and CEE of Facebook, focused on the role and responsibilities of social media and other online intermediaries in overcoming hate speech on their platforms. According to her, it is necessary to promote responsible journalism and the use of tools such as content moderation and removal, with the strict observance of the requirements of international and national legislation on freedom of speech.

The first panel discussion was devoted to the dilemmas and challenges faced by national media regulators in the context of countering hate speech in the digital era. In addition to the effective implementation of European standards, the national context to overcome this phenomenon was also discussed.

Since the exact definition of the hate speech does not exist, the definition of such a phenomenon relies on the discretion of the regulator, which, unfortunately, often is passive, as well as the judiciary. In addition, there is currently a lack of research on the relationship between expressions and their impact on the audience, which is often fatal for individuals or groups. The issue of hate speech was considered in detail by the participants of the conference from the legal standpoint – as the concept and the content it denotes, were considered by the European Court of Human Rights, the inability to use the European Convention on Human Rights to cover hate speech, the latest developments in the area of digitalization of media and communications. Participants unearthed the need for standards to be implemented by the national judicial authorities on the basis of the case law of the ECtHR.

In addition, during the conference, participants were trying to find out how effective self-regulatory initiatives can be in overcoming hate speech and offensive speech, including the effective implementation of editorial standards and professional ethics, codes of conduct, complaints mechanisms and cooperation with all parties involved in the media process . Representatives of the journalist organizations of the Netherlands, Bosnia and Herzegovina, Finland, as well as UNESCO and the Anti-Discrimination Department of the Council of Europe shared their experiences and views on how to help in a situation where the language of hostility and hatred appears in the media.

On the second day of the regional conference of the Council of Europe “Addressing hate speech in the media: the role of regulatory authorities and the judiciary”, the attention of its participants was focused on the aspects of migration, media literacy and the peculiarities of working on the creation of effective mechanisms to overcome hate speech and offensive speech.